when we last saw our couple in episode 1 they were at a stone altar waiting for morey, the amazing assistance dog, to bring them their wedding rings. little did jeff know that his beautiful bride had gone to the dark side and conspired with darth vader (aka sean) to forge the rings in mount doom. wait, wrong movie. carolyn secretly asked lord vader to deliver the rings as a surprise for jeff. luckily, jeff didn’t hear the little kid sitting at one of the tables in the restaurant yelling to his parents “that’s not the real darth vader!” so he was totally surprised to see darth vader walking down the aisle instead of morey the wonder dog. 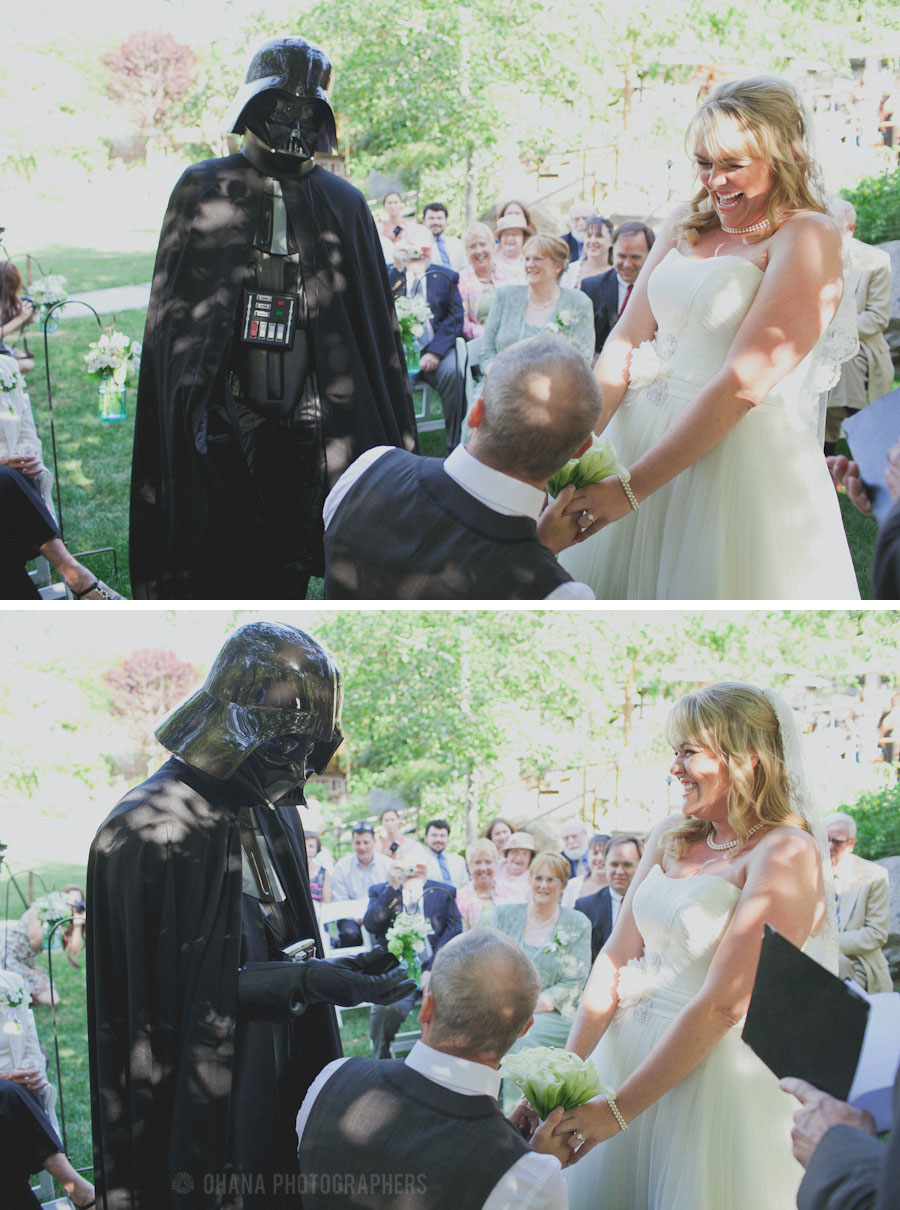 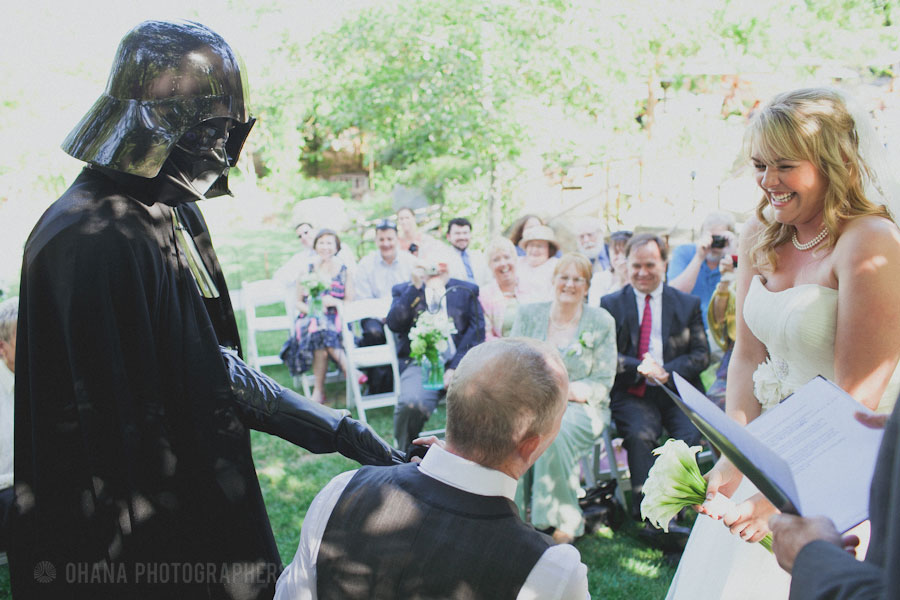 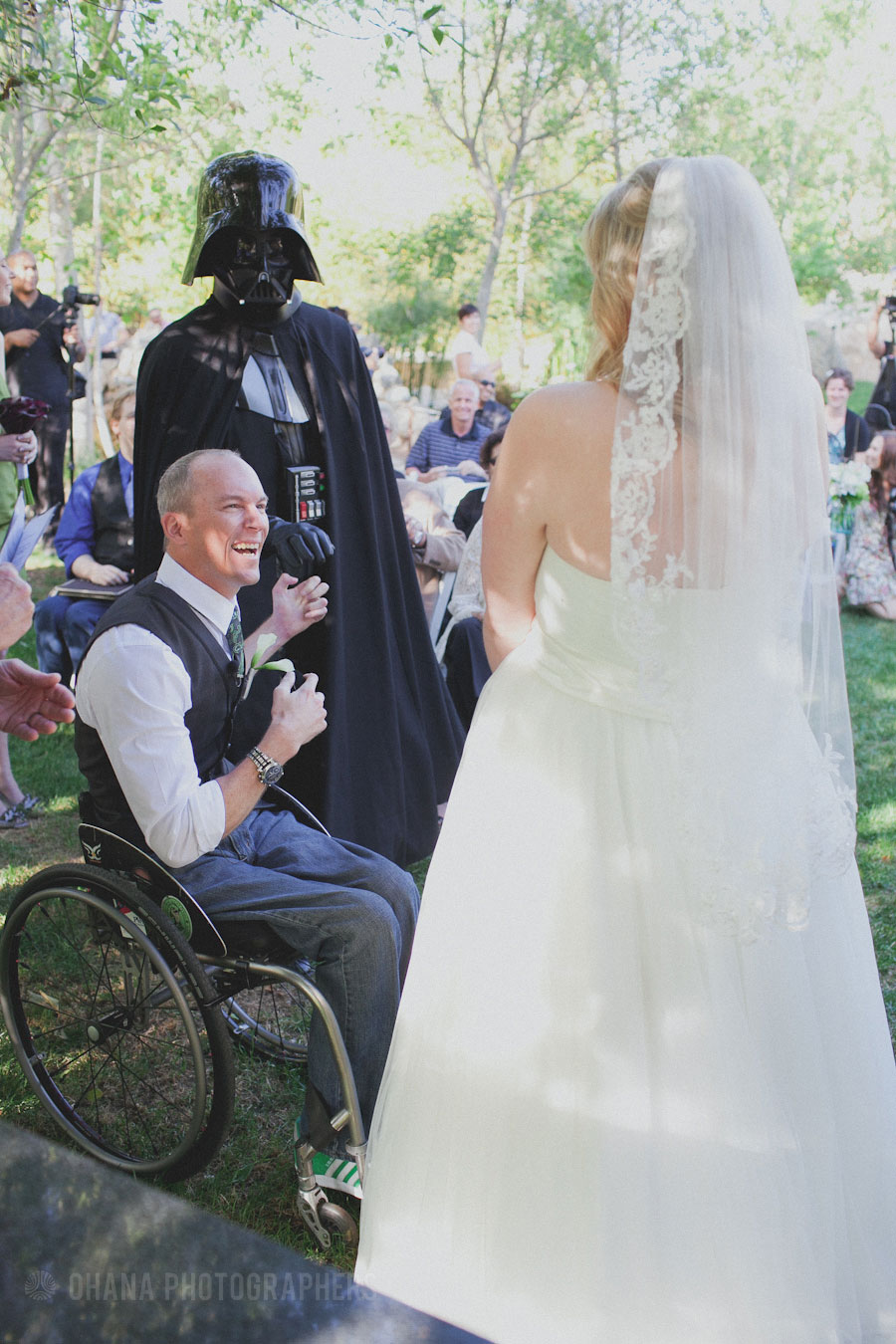 how do you follow up darth vader delivering your rings? with an iron fist brewing co golden age and spice of life unity beer, of course.

back story on the iron fist brew – when carolyn and jeff first moved to san diego they went to their now favorite local watering hole local habit, and sampled an iron fist hired hand. they both loved it, so they decided to go check out the brewery in nearby vista ca. before they could visit the brewery they attended a brewer’s dinner at local habit, at which they were seated at the same table as brandon sieminski (the head brewer at iron fist) and his family. they hit it off. long story short, iron fist brewing co. is where carolyn and jeff celebrated on the night of their “official” proposal. lots of good times and positive associations with their beer. 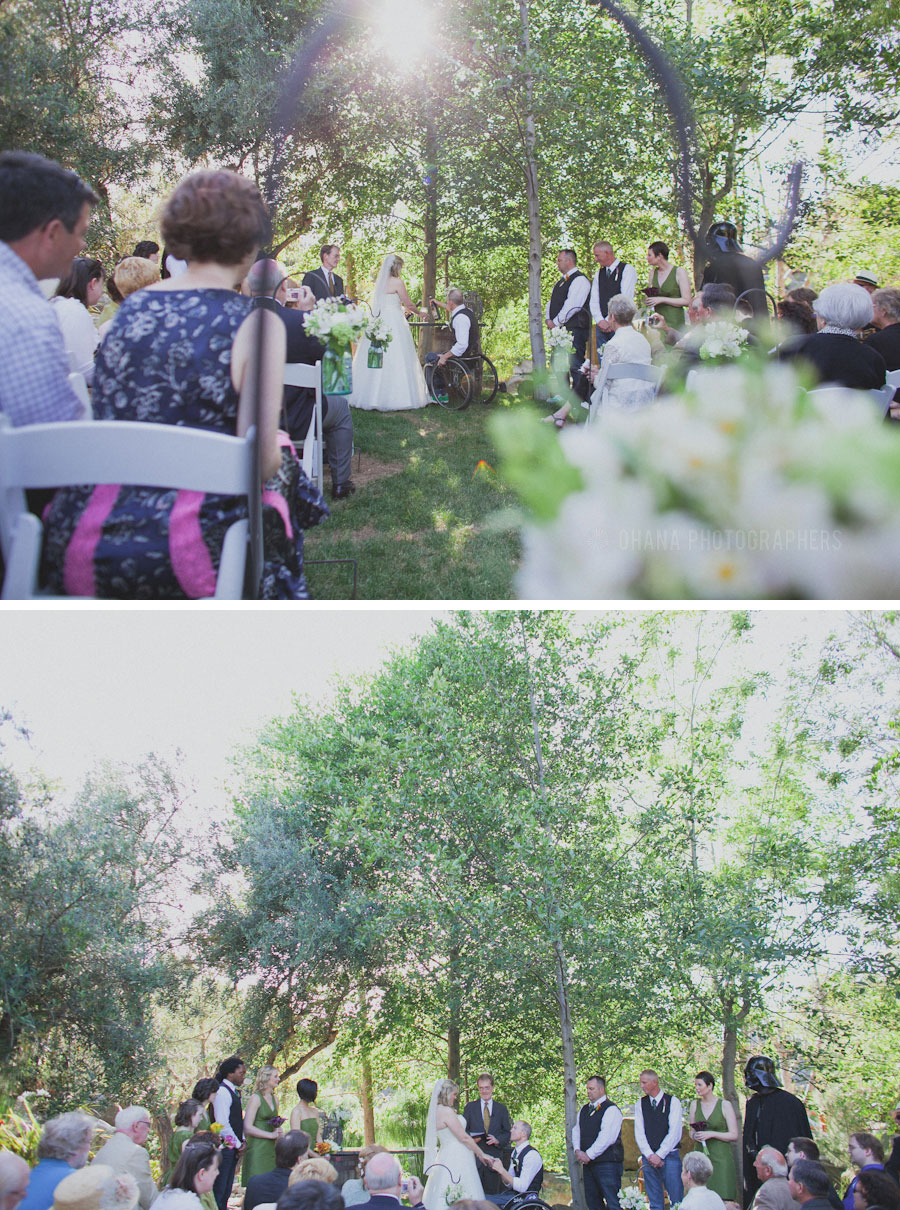 with the ever present threat of darth vader force-choking you to death, you better mean it when you say “i do.” 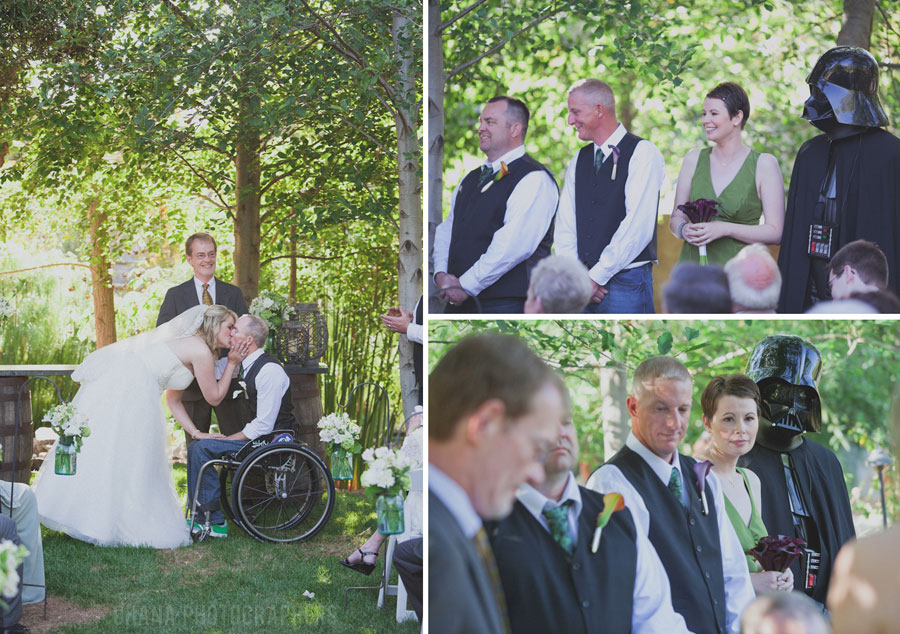 nothing says fun like getting showered with pop out streamers. 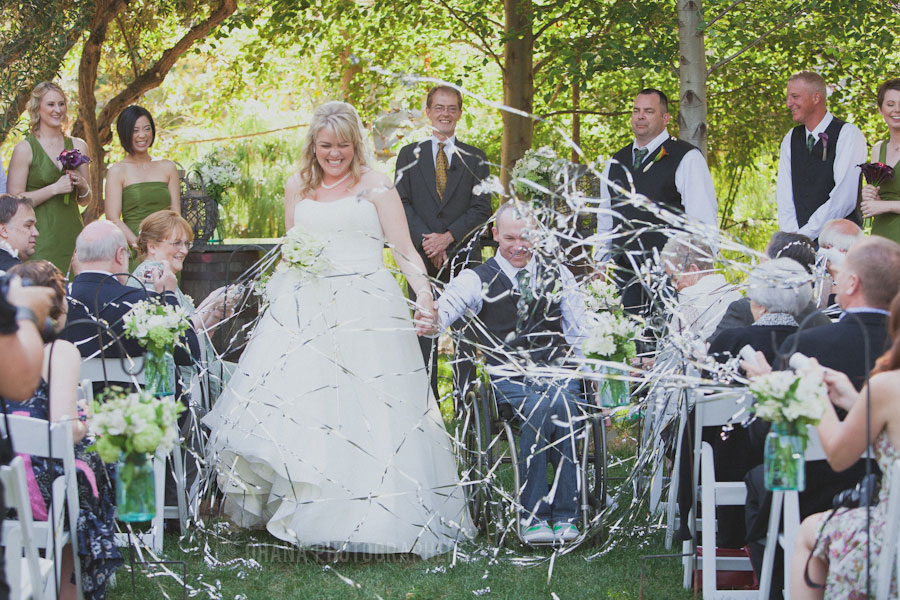 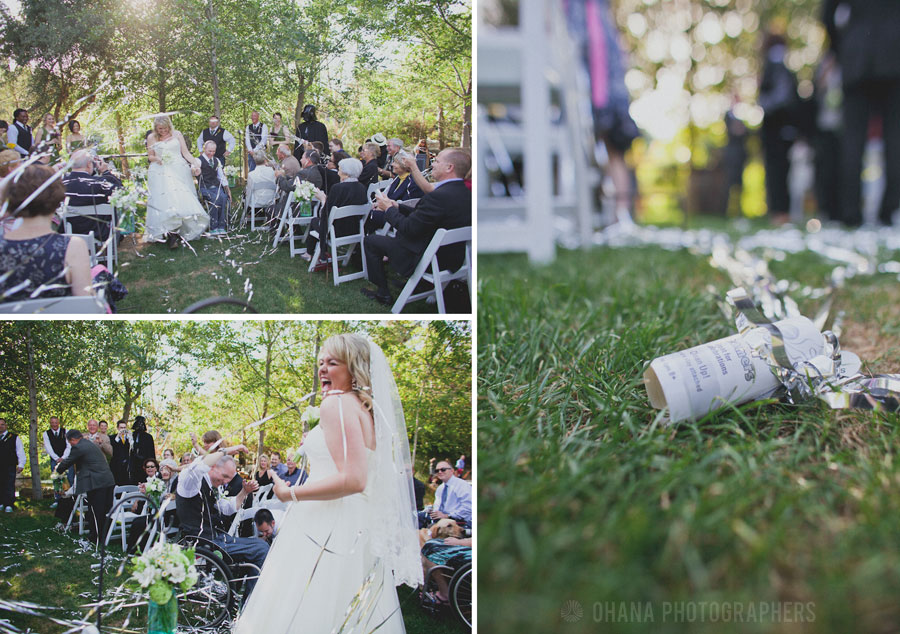 pop out streamers are easy to clean up… but not so easy to push a wheelchair through. jeff was so tangled up that not one, but two knives had to be employed to free him. good luck getting those ada approved. 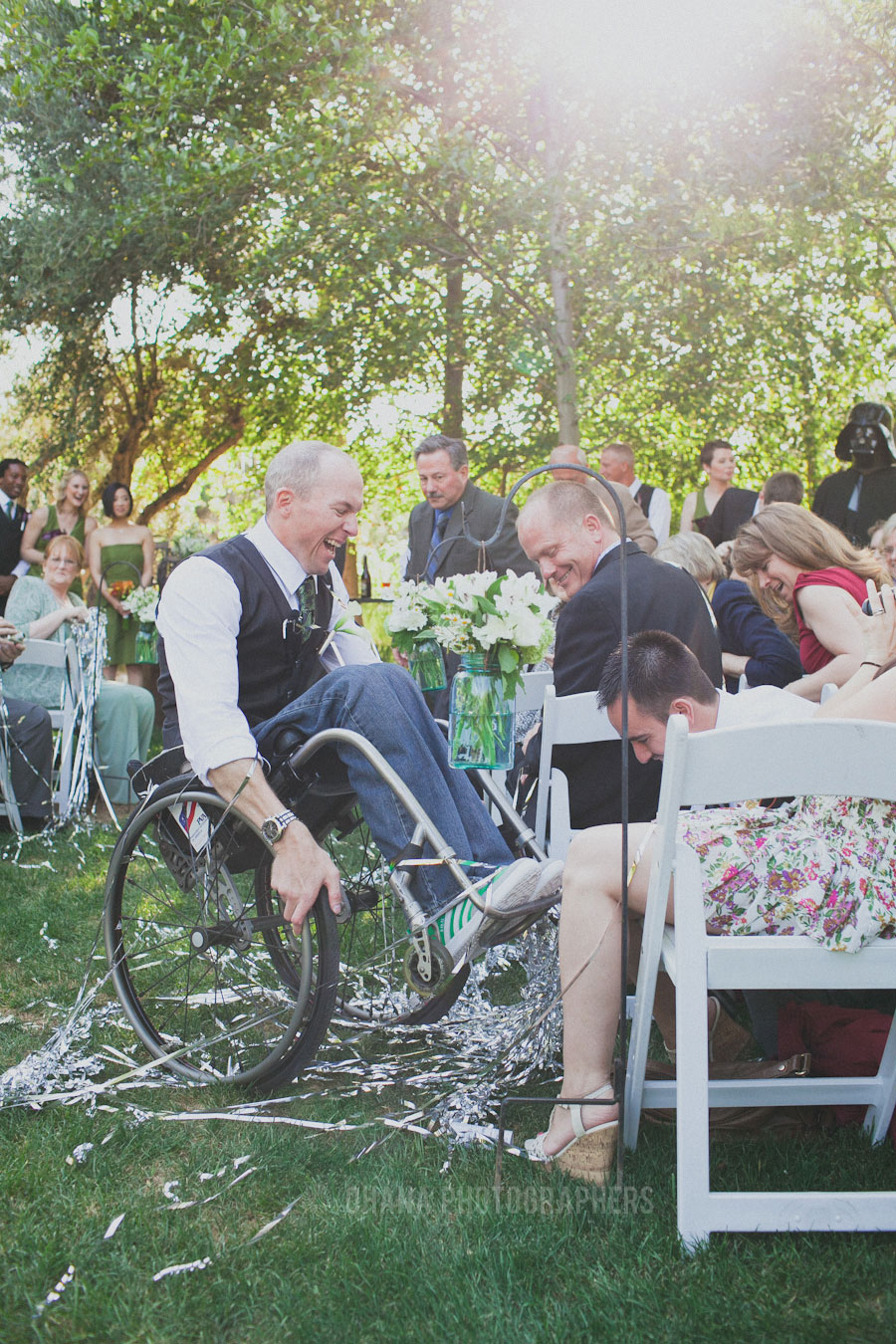 everyone had a good laugh about it though. i love this couple!

after a brief chat with alice and grace while walking down the aisle, lord vader found alice’s lack of faith disturbing.

you were unwise to lower your defenses. 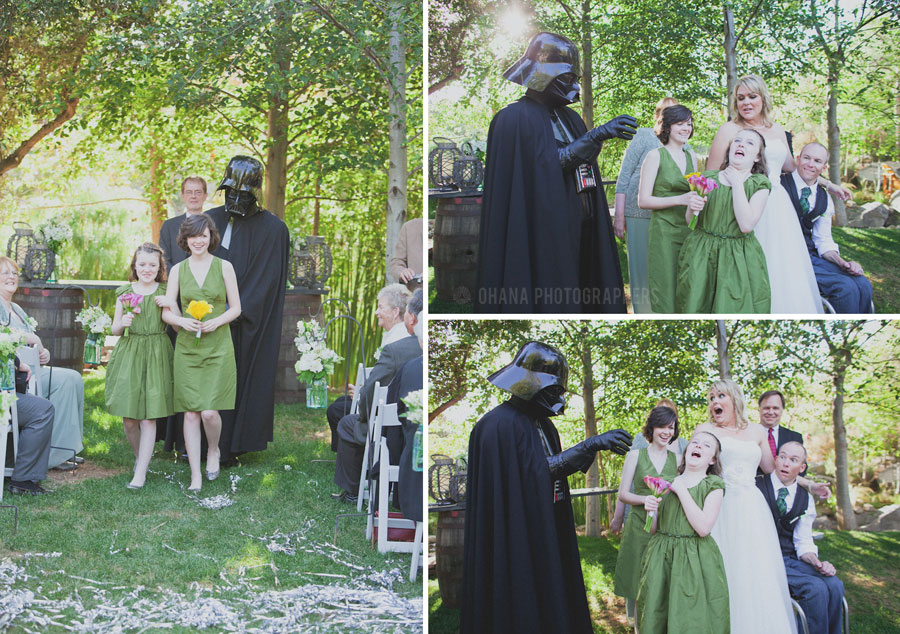 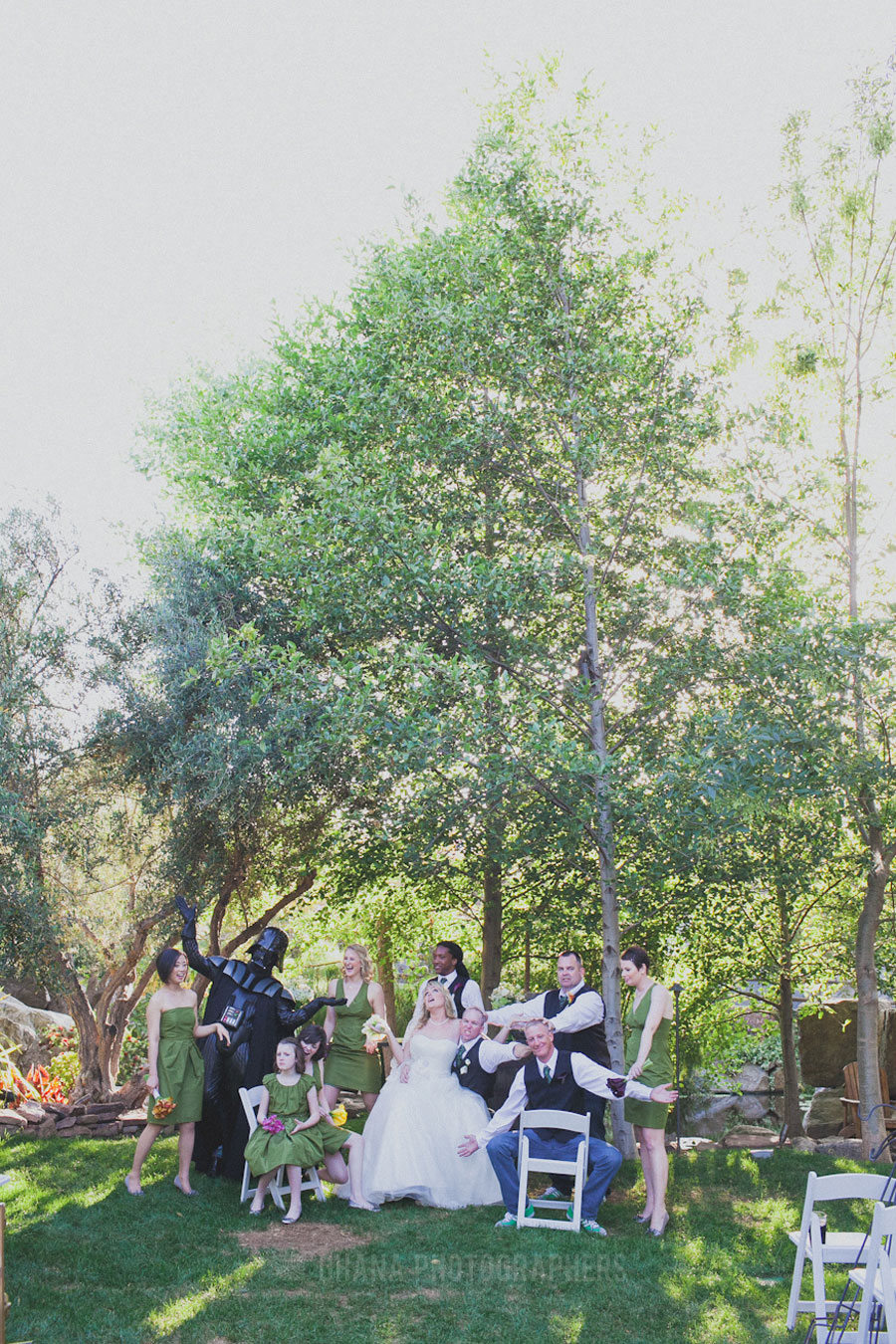 you should listen to this while viewing these images. 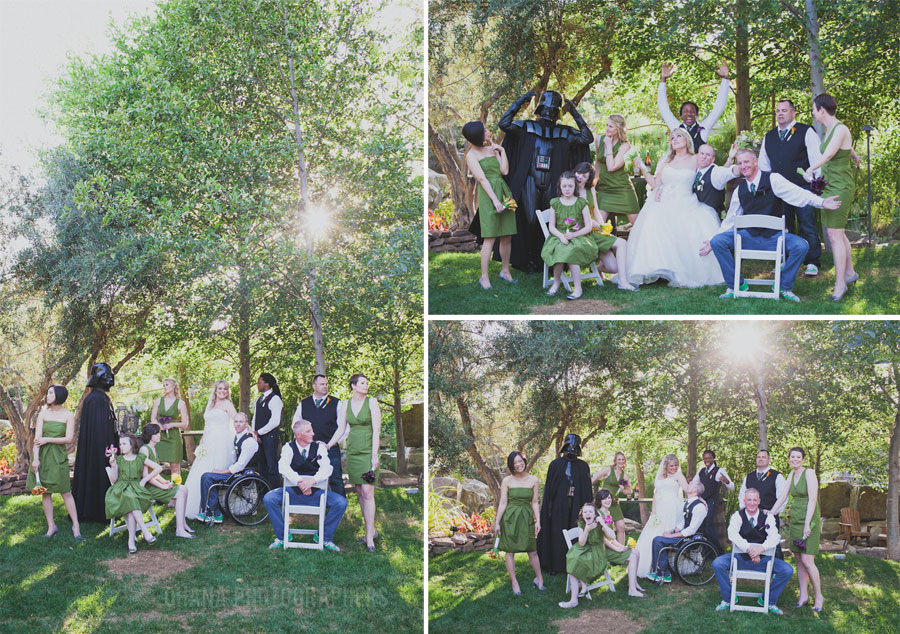 just for once, let me look on you with my own eyes. i have to give sean props for suiting up as darth vader. i know it wasn’t easy. not so much because of the heat, but because he’s a star trek guy. kim and i can’t wait for star trek 2 (or whatever they decide to name it) to come out. we will definitely be in line for the midnight show in 2013 (celebrating our anniversary 1 day early). 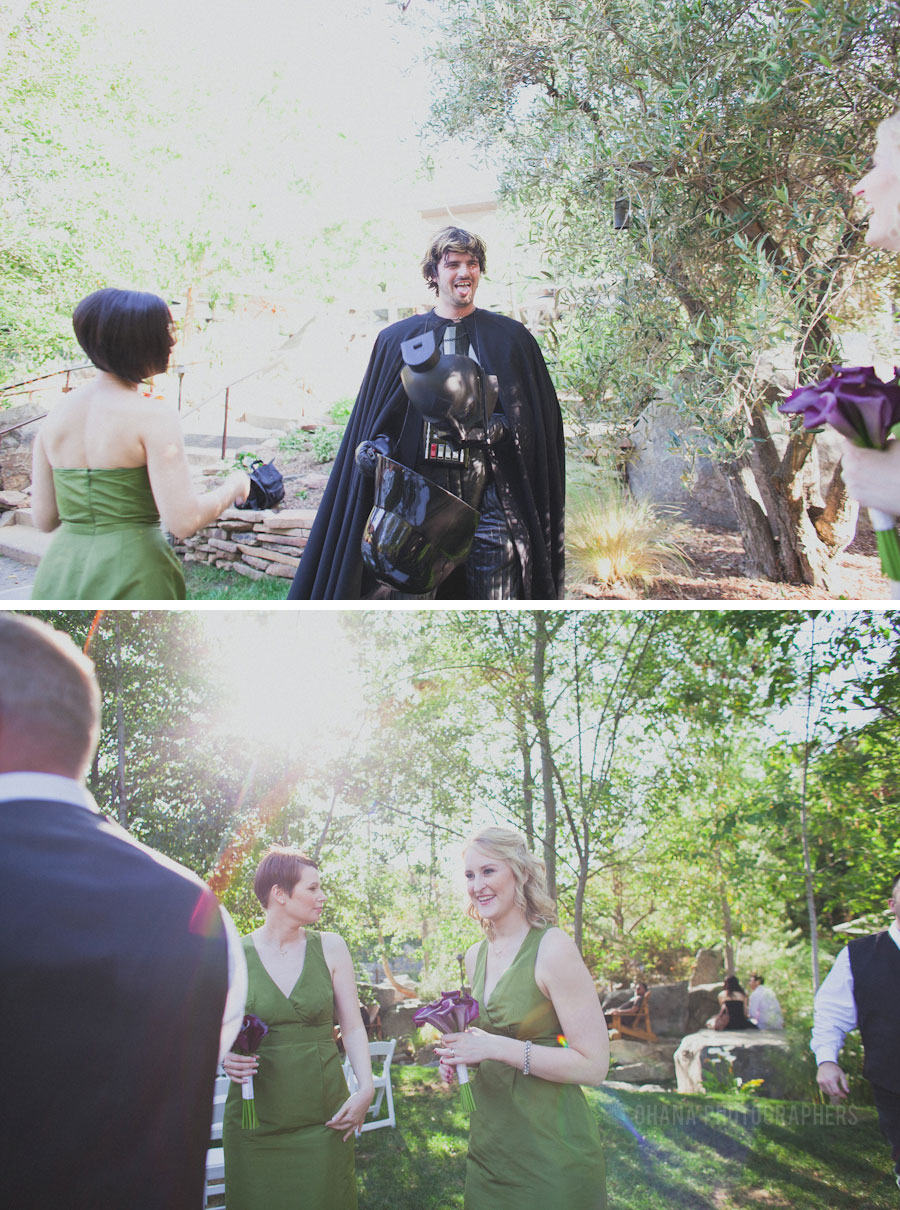 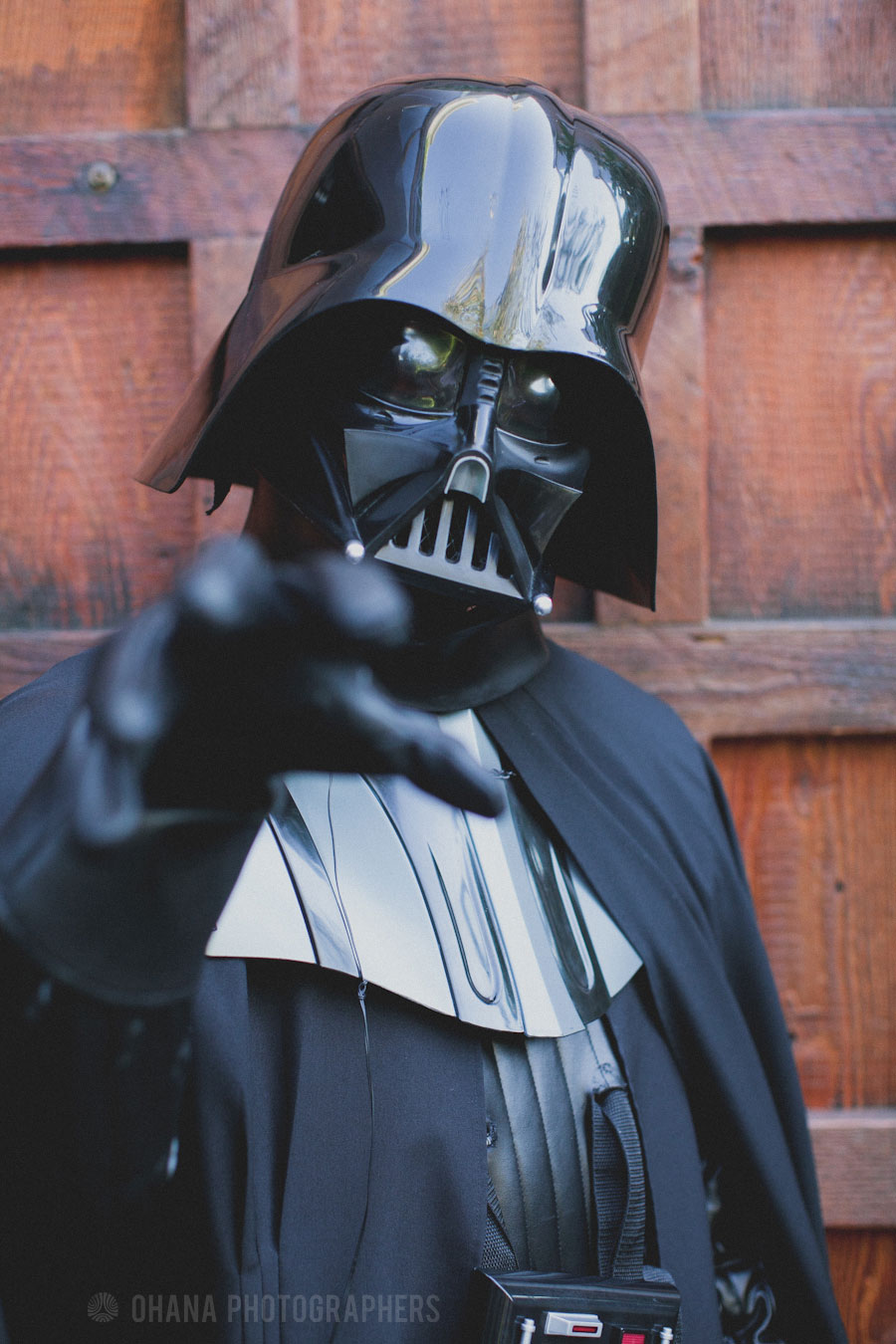 this random guy walked by us while we were shooting bridal party portraits and sean says to him, “excuse me sir, but i don’t walk around with your head on my shirt!” 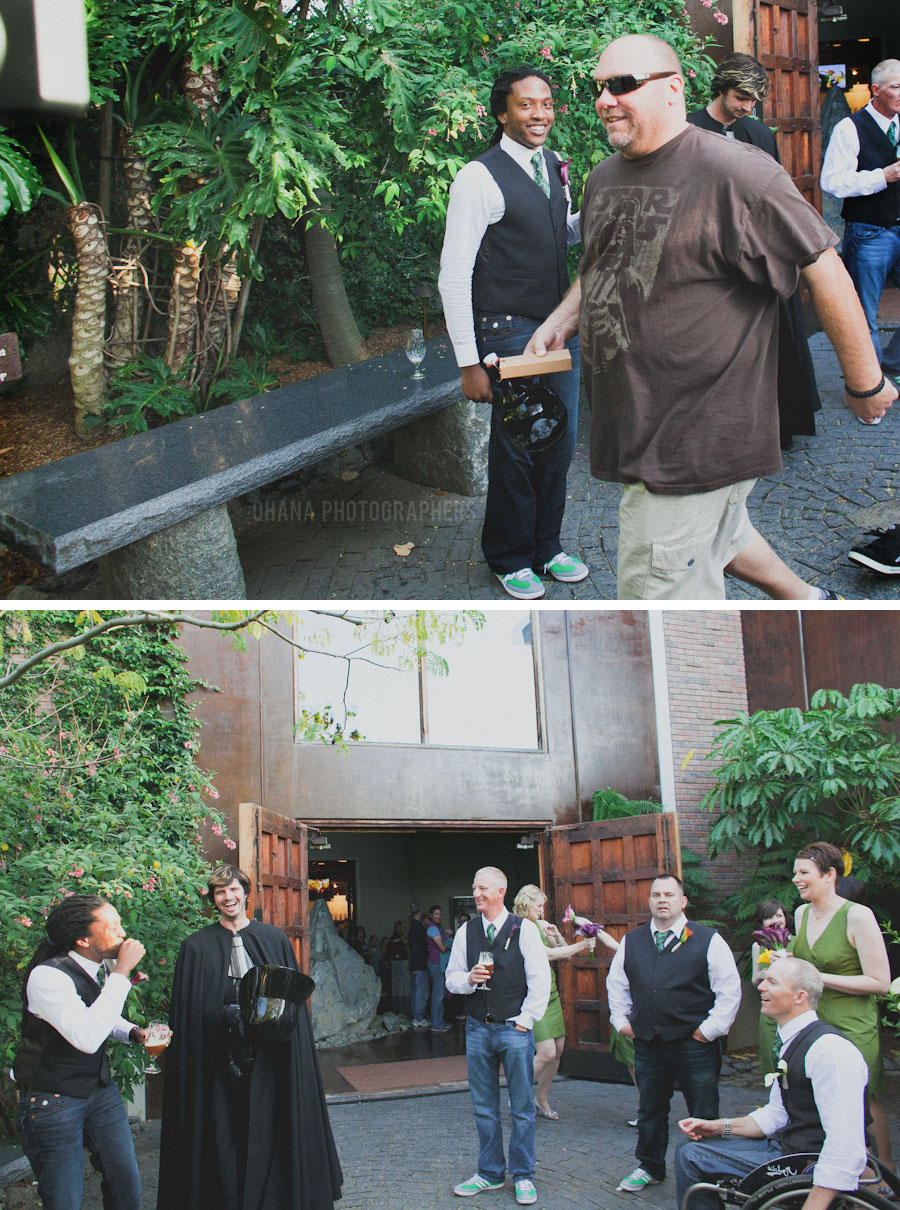 i love this shot of the whole group. 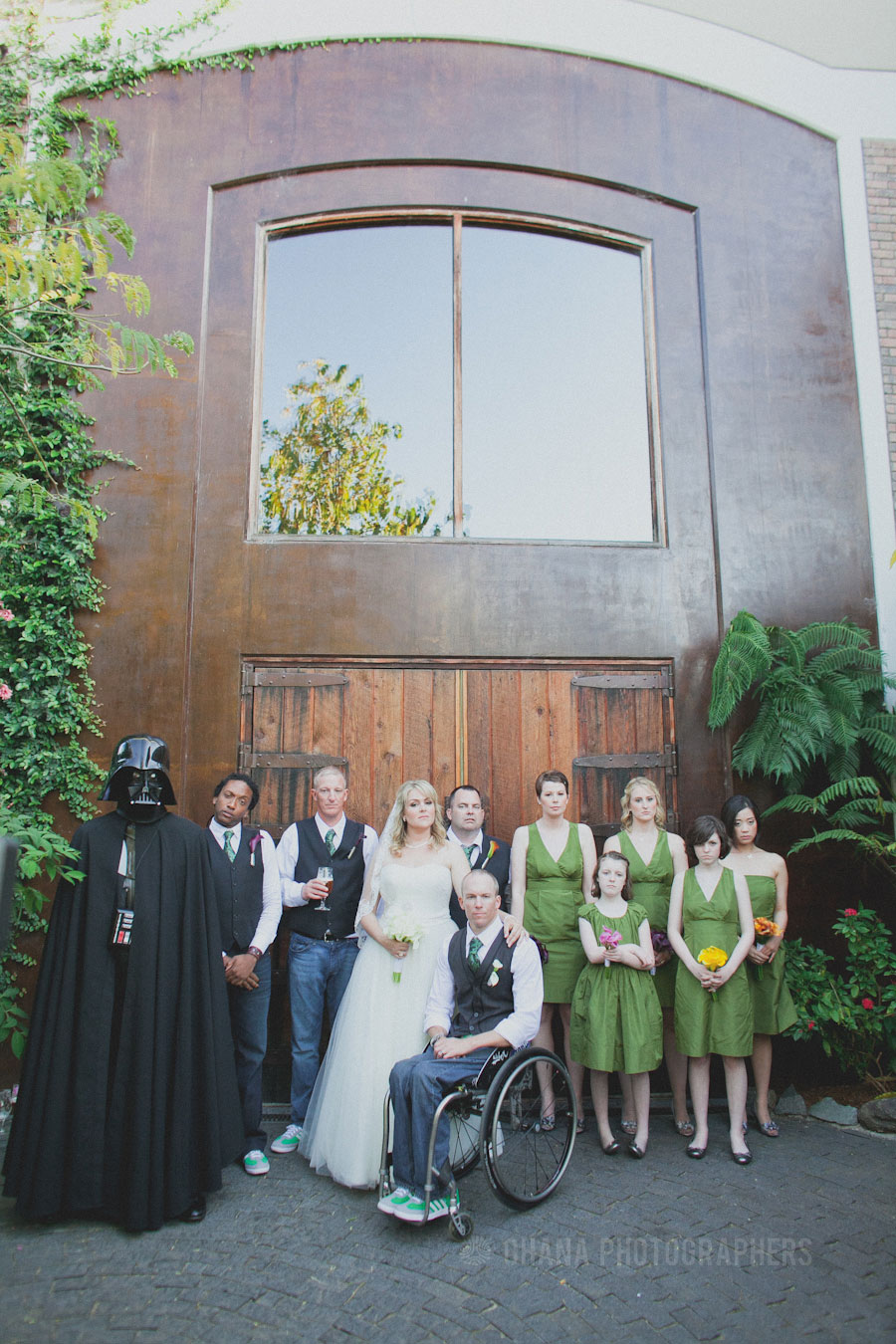 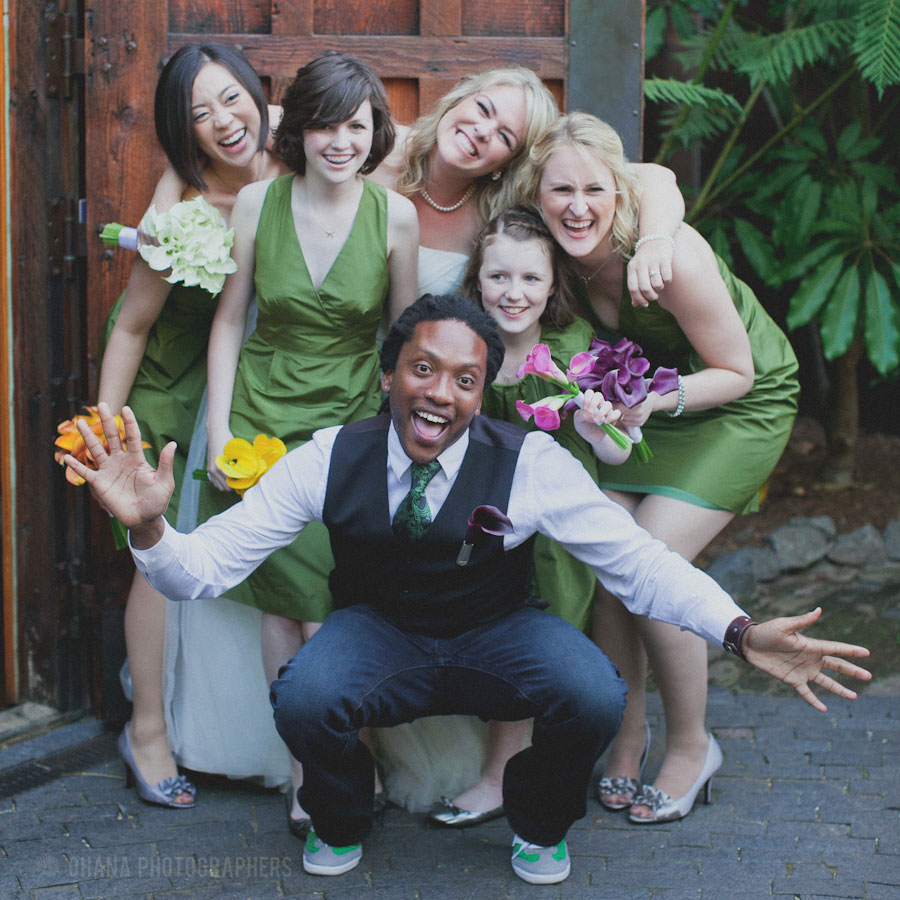 carolyn doing what she does best… looking all hot n stuff. 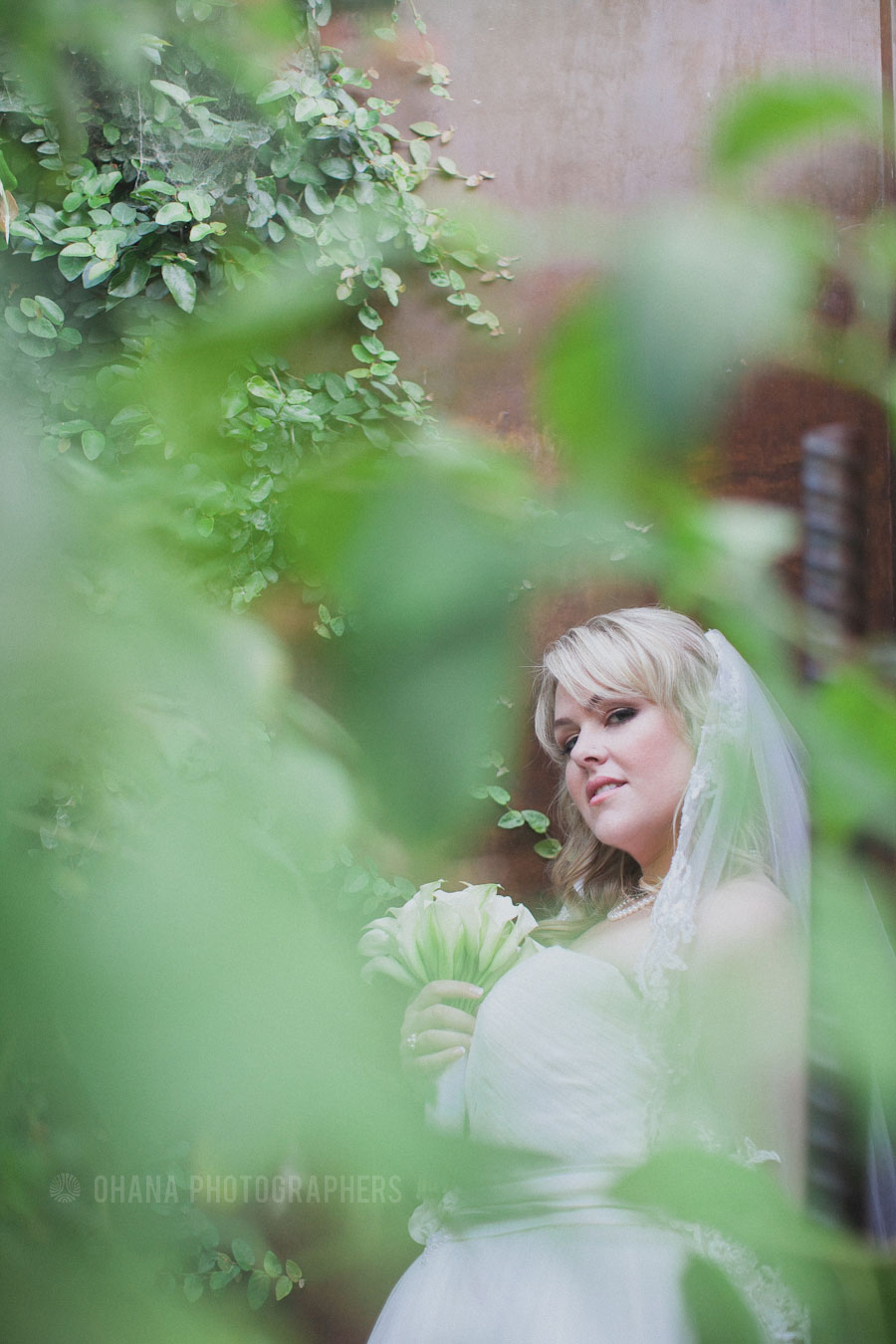 for the first time as mr and mrs! 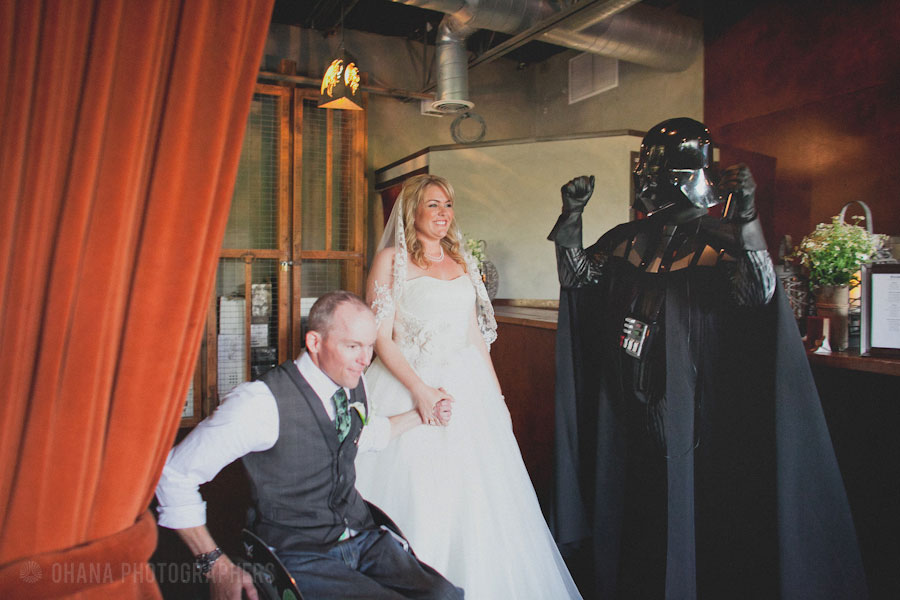 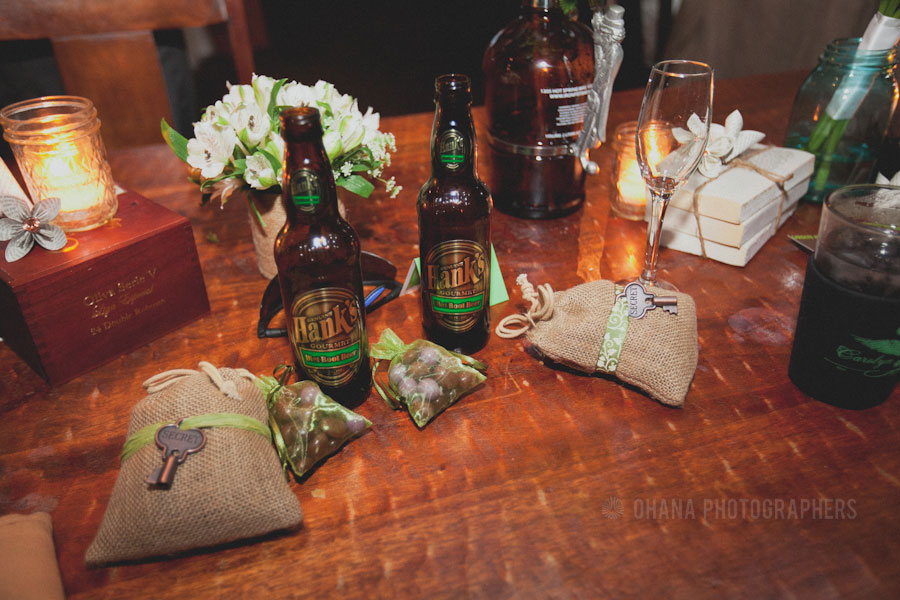 gene tried to force-choke kim for making him laugh, but his feeble skills are no match for the dark side. 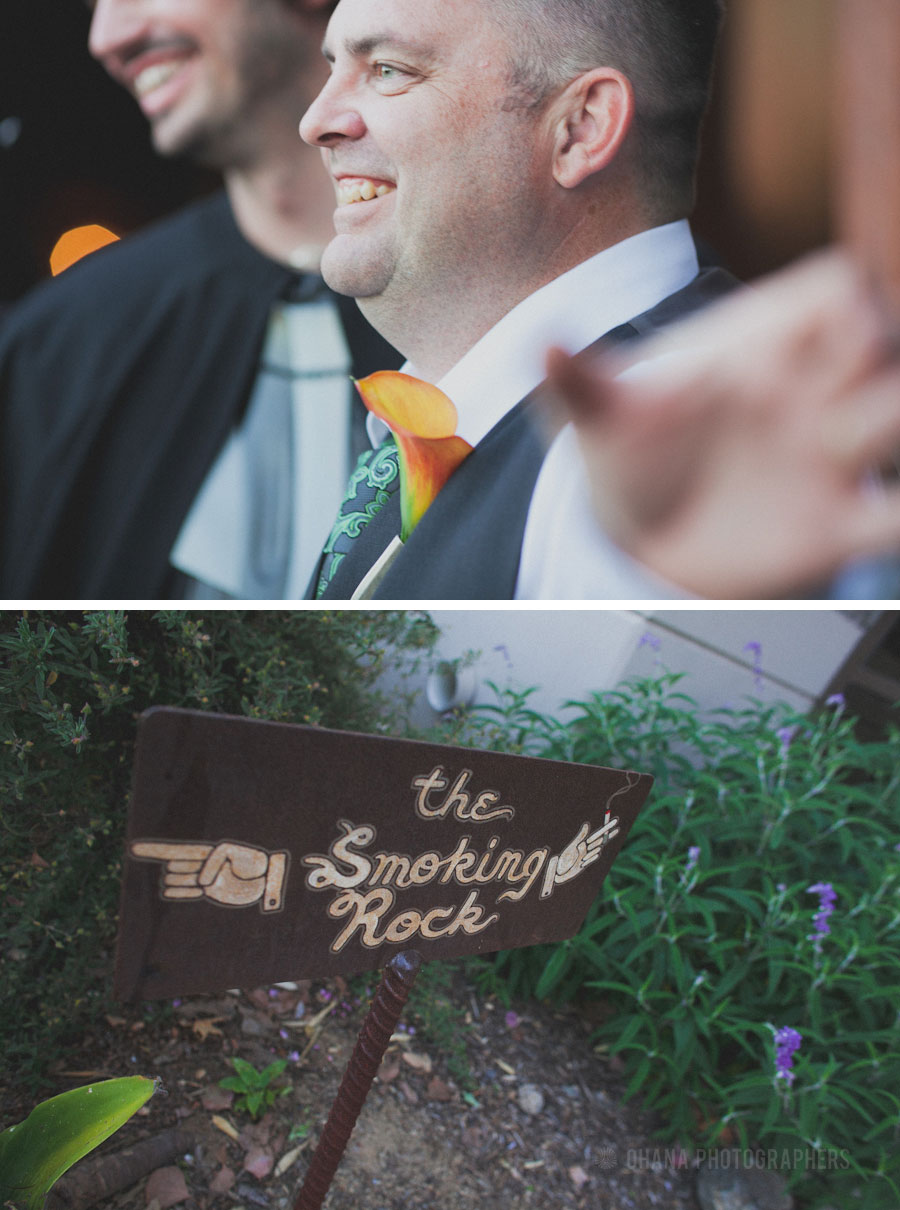 after posting episode 1 of carolyn and jeff’s wedding she told us an awesome story that her brides-man michael told her about the custom adidas she gave him. as the story goes…

the day after carolyn and jeff’s wedding michael was drinking in ocean beach and met a girl who took him down to tijuana to go clubbing for the night. as they were trying to come back into california they ended up getting detained for several hours. (do not want!) turns out the girl’s family members were convicted drug traffickers. one of michael’s key pieces of evidence that he was not involved and was, in fact, a good ohio boy who works 80 hours a week on the nyse were…

his shoes, and the wedding date embroidered on them.

this is a very very summed up version of the story michael told carolyn, when he turned up in vegas 2 days later to meet with carolyn, jeff, and the rest of the bridal party.

to sum it up, michael used his mi adidas to get out of going to a mexican prison.
in my book, that makes these shoes the best bridal party presents ever. 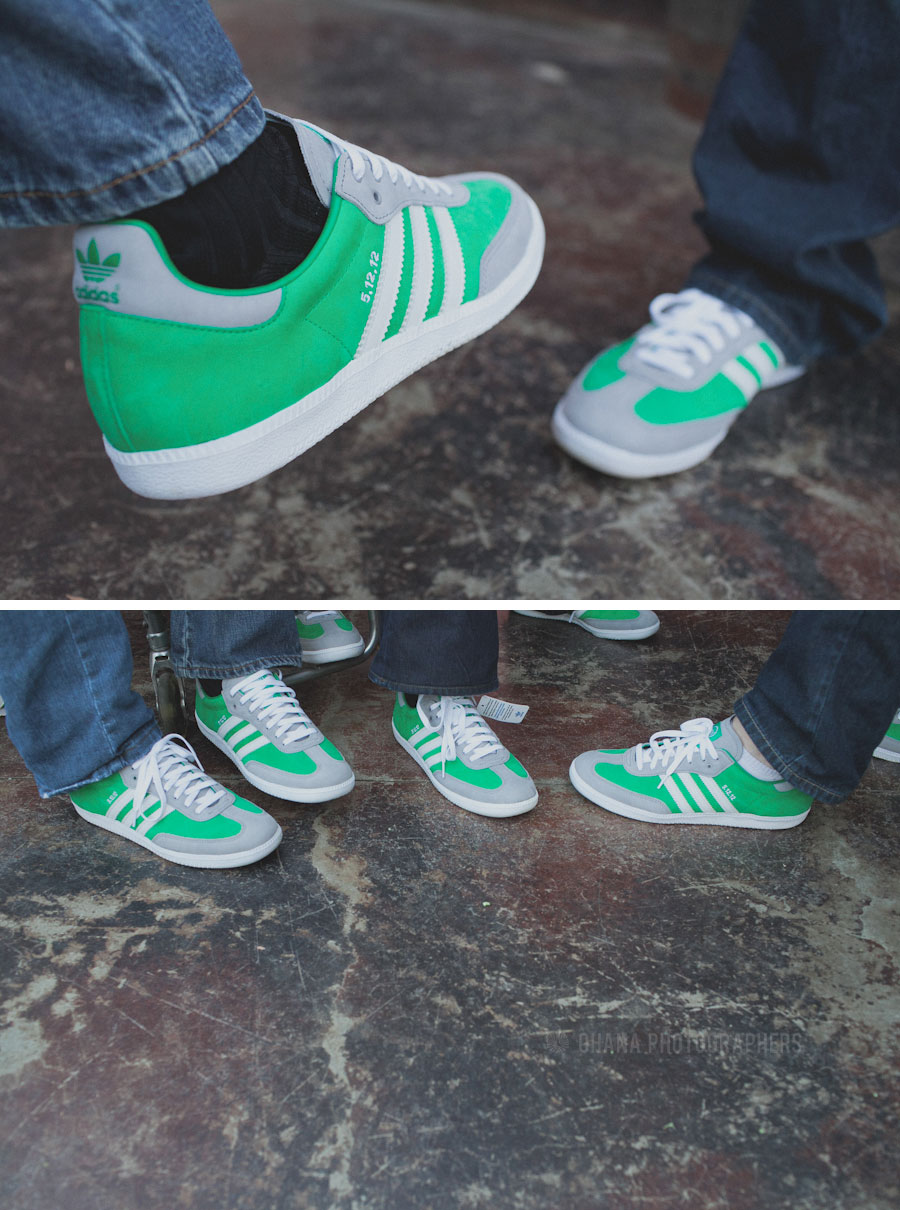 jeff and carolyn were so happy you could literally see the joy in their hearts. 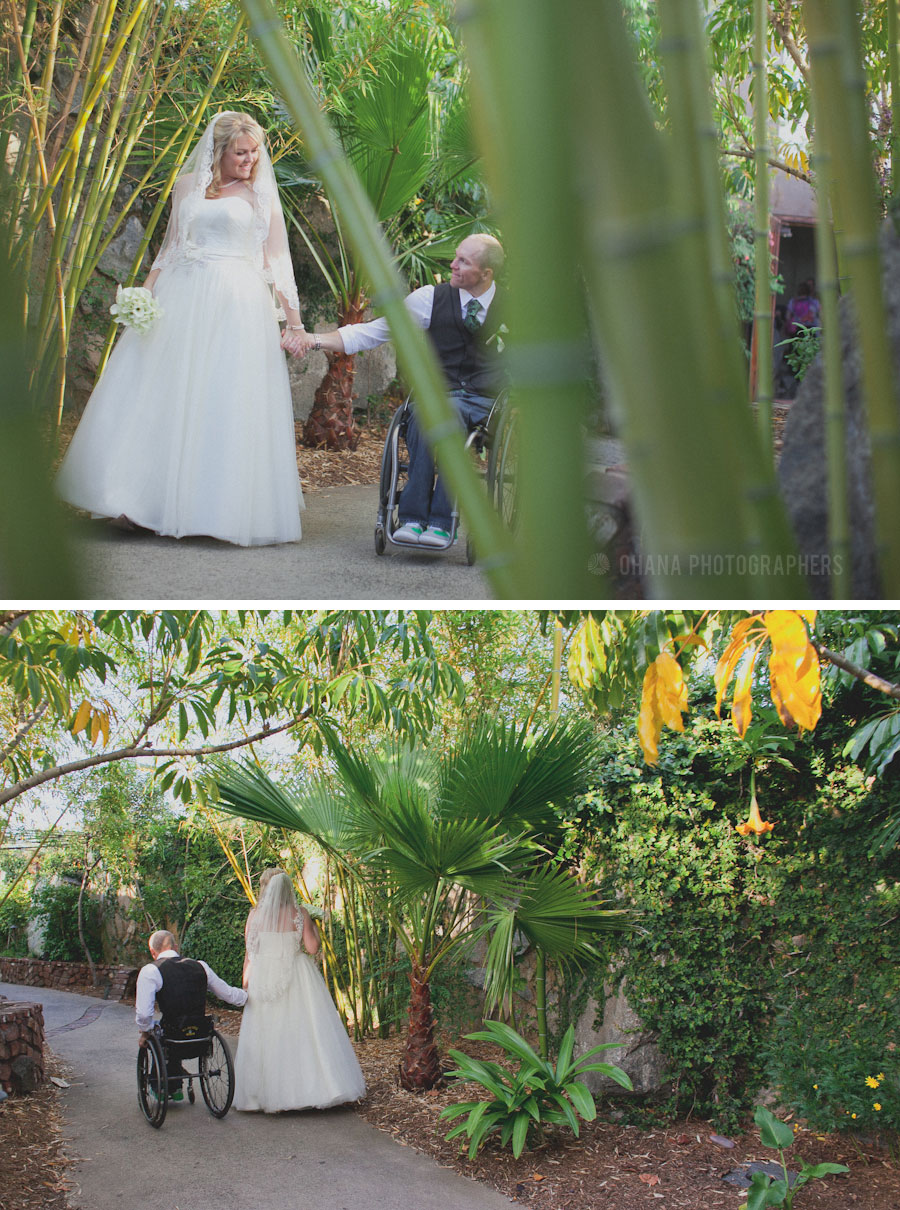 and now your highness, we will discuss the location of your hidden rebel base. 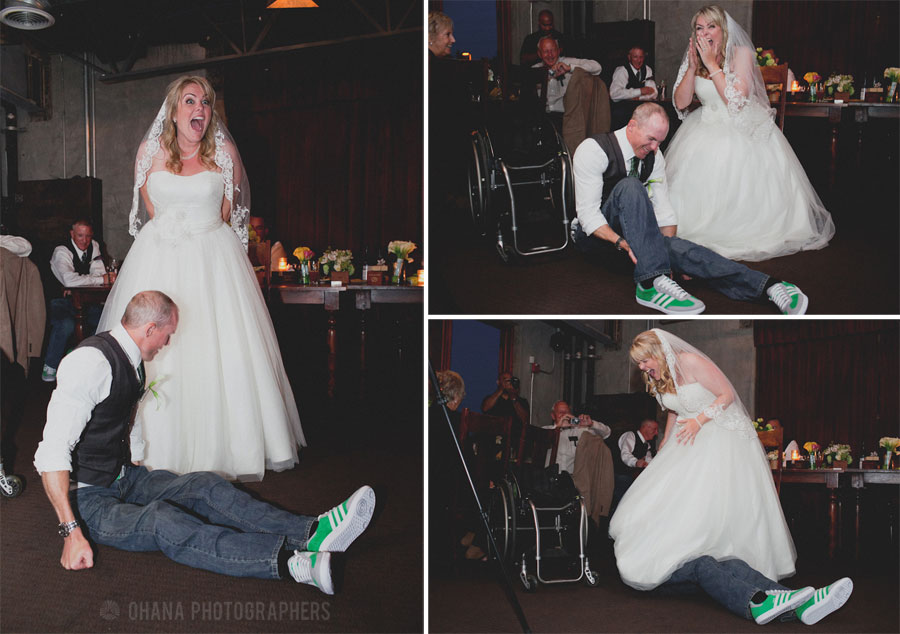 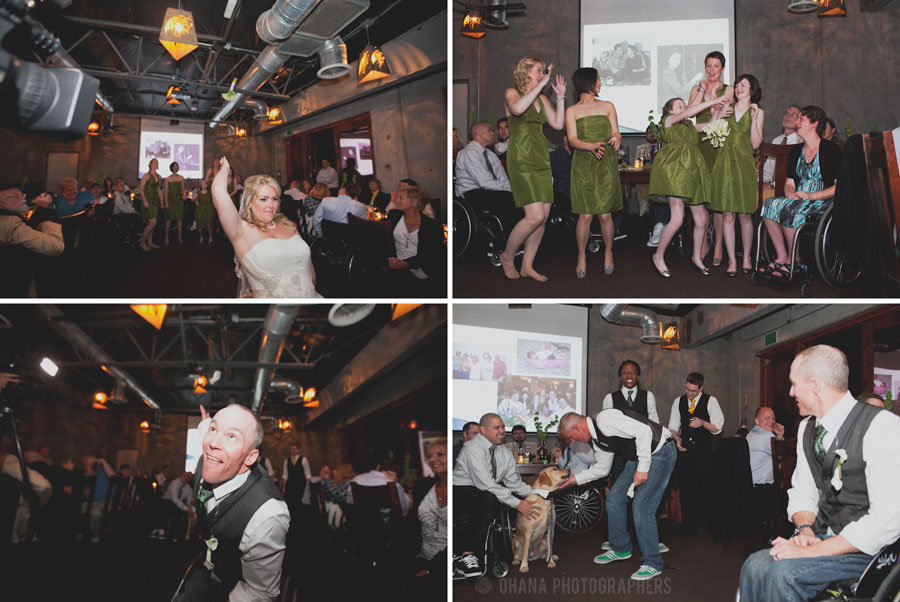 i see you have constructed a new lightsaber. your skills are complete. indeed you are powerful as the emperor has foreseen.

we were pretty stoked when the guys at stone allowed us to go into the brewery to take a few shots where the magic is made. 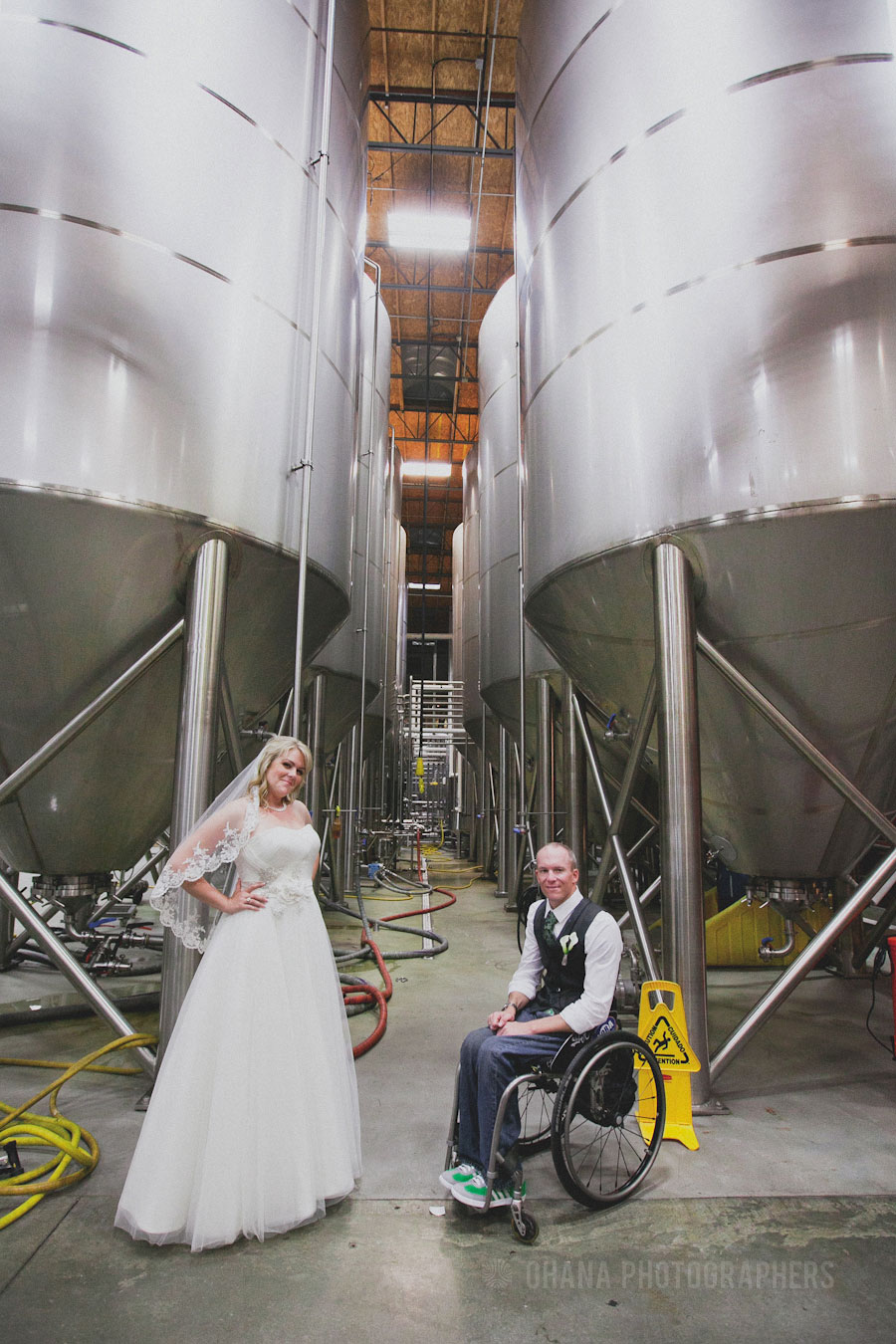 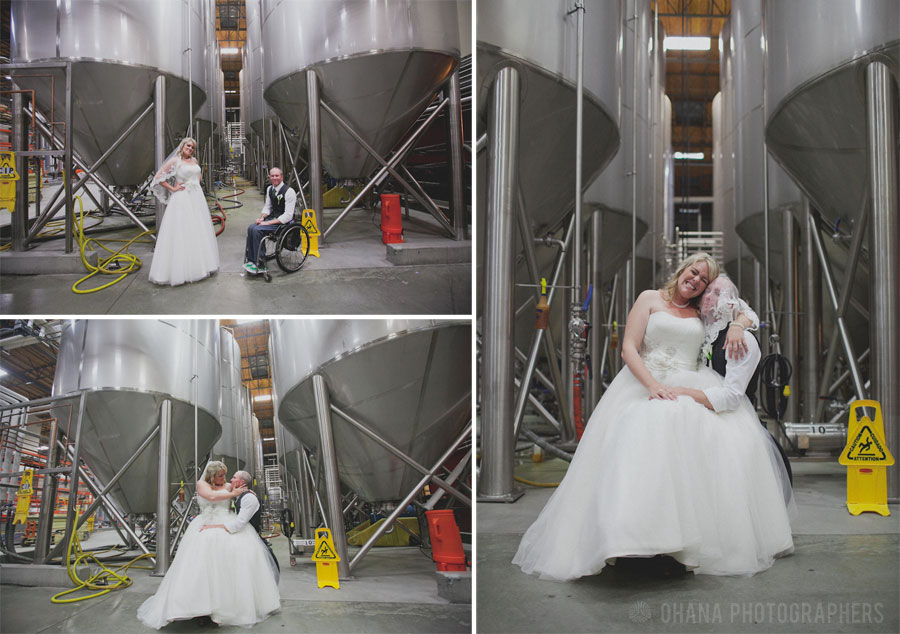 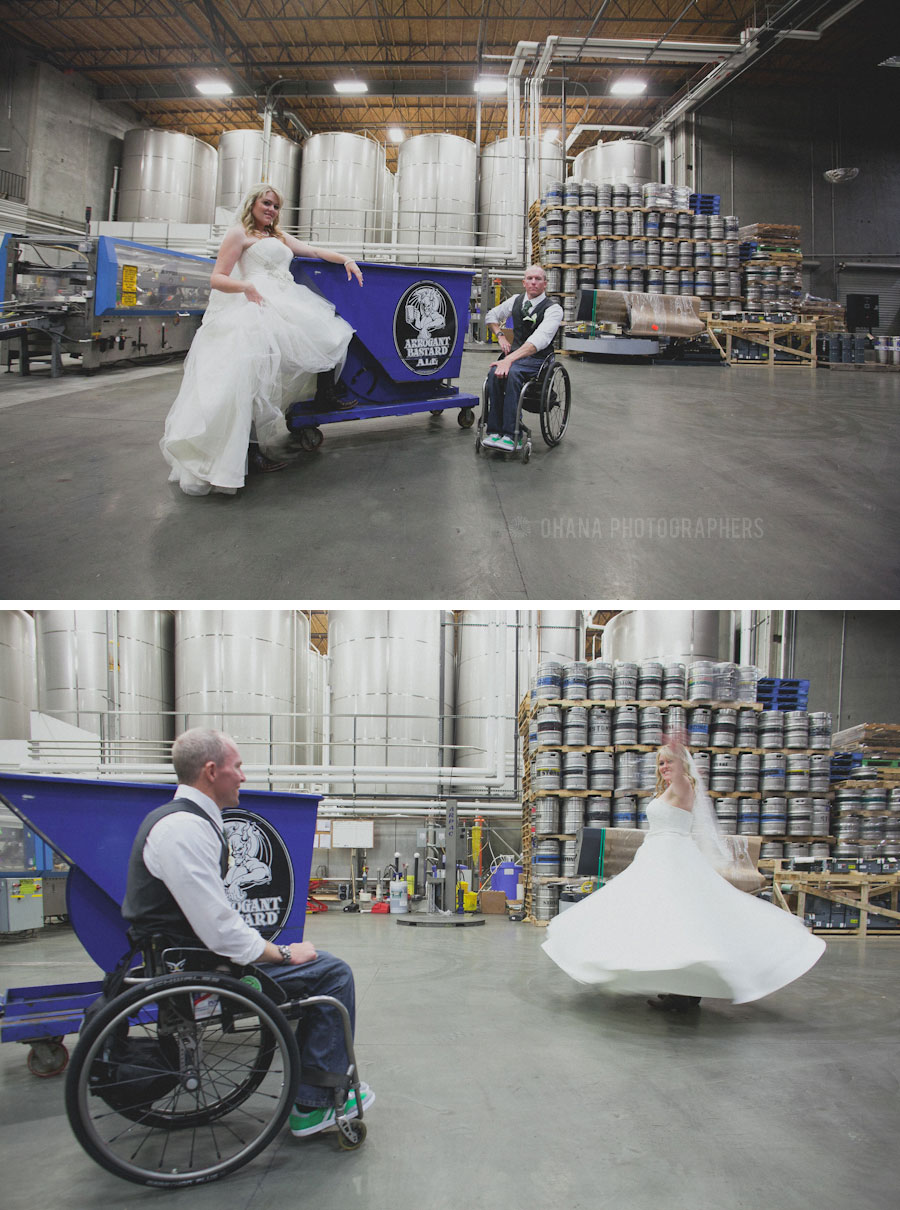 while we were taking pictures one of the brewmasters hooked jeff up with a glass of ruination ipa straight from the kettle. it doesn’t get any fresher than that. it’s fresh to death. 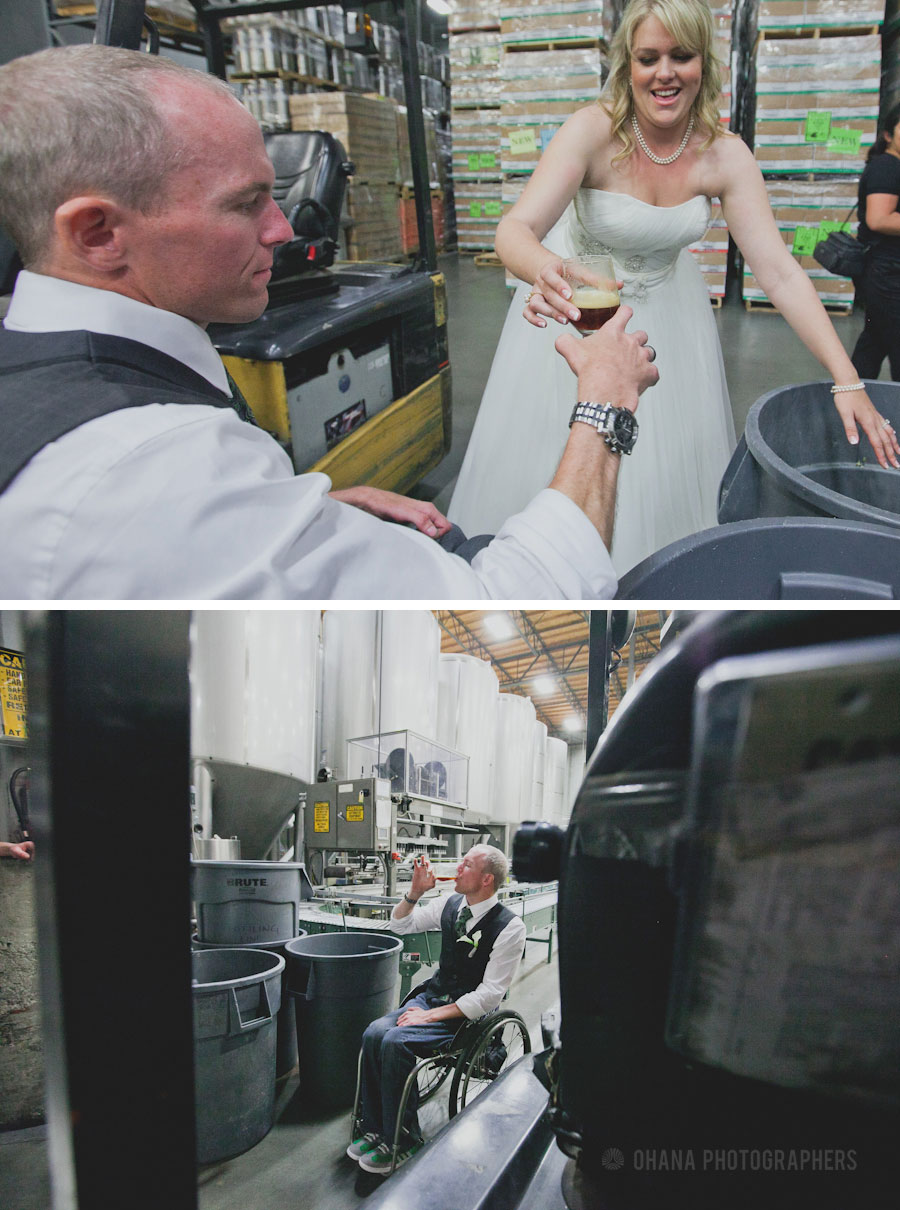 he didn’t have his backup dancers at the wedding, but he still broke it down.

carolyn and jeff, we can’t thank you enough for being as awesome as you are to us. you went above and beyond, not only for your guests, but for us as well and for that we will be forever grateful. you really know how to make someone feel special.

your wedding was absolutely unforgettable, and will always hold a unique place in our hearts, as will the two of you.

the force, and our love, will be with you always.

thanks to all the family, friends, and vendors that helped make carolyn and jeff’s wedding day awesome!

if you missed it or just want to see it again, click here to see carolyn and jeff’s engagement session at petco park and balboa park

Um. freaking. wow. I literally love each and every picture! How gorgeous is this bride? Where do you find these couples? No, serously? :-) Beautiful work as always!

Just stumbled onto your site, while looking for awesome wedding ideas. I have to say I’m blown away by your pictures and the way you capture your couples!
6 weeks to go to my own wedding, this couple gave me back the stoke! I hope my pictures come out as rad as theirs! Congratulations to the beautiful and obviously happy couple! Woo hootie!

I couldn’t love these more if I tried!

As always…just simply beautiful & fun! This is why when I meet “Mr. Perfection,” I’m calling you guys. =o)

Omg, the one of them sitting in the brewery with her head on his head, I LOVE!

I can’t get over how awesome this wedding is! You captured it perfectly! Love all the pics in the brewery and the streamer send off was amazing!

Who knew you could get married at Stone!? Love that beer! Definitely need to go check it out. Great pics!

Darth dancing is epic, all around awesome pictures and wedding! Congrats to the beautiful couple!

Now these are what I call rad wedding pics! Awesome!

i almost never comment on blogs, but this wedding was awesome… so freaking awesome! Love your photography style too!

This might be the coolest wedding ever!!!! Of course I am a huge nerd and fan girl about Star Wars. The groom looked fantastic, love his vest and tie, the guys shoes are to die for, the bride and her girls looked amazing and what can I say about The Dark Lord of the Sith, except O.M.G awesomeness!

Seriously, best ring bearer ever, in the history of all mankind.

so incredible. love the playfulness of them.

Oh my gosh!!! These are so amazing!

The groom’s expression when the Darth Vader ring bearer comes out was so flipping amazing… The best “first look” ever! Kudos to the couple for making their day personal and special.”

Such a stylish and quirky wedding all in one! Love that the bride incorporated her new husband’s loves as well!

Wow wow wow. Your creativity in all your pics are just amazing! Love everything about this wedding! LOVE!

You captured this perfectly. This Star Wars wedding came out so stylish and classy! Nothing can surprise me now! Love it!

Wow, to make a Star Wars themed wedding not look cheesy is a feat! Well done! We need more fun weddings like this! Very inspiring!

Some of the funnest wedding pics I’ve seen!

The pic of the bride drinking her beer. Purely epic.

I’m not a Star Wars fan, but that picture that starts the post drew me in lol. Not at all what I was expecting, this wedding was captured with class and love. Perfect.

These are just lovely. This pictures read like a best friend took them.

Fantastic!-looked like a lot of fun…when it’s that much fun is it work ;)

This such a beautiful set of photographs! These really feel so personal. Love, love love!

You really get some fun weddings, but your shots always more than do them justice. I love how natural the shots are, really incredible work as always!

This wedding is full of awesome. Darth Vader ring bearer, beer drinking (my fav) And as usual, you captured the mood perfectly.

Timeless!!! She could be from any era. Can’t love this wedding enough! Love!

What a lucky couple to have such beautiful memories captured forever. Love the pic of the groom getting out of the chair, the bride just looked so happy. Melts my heart. Beatuifully captured.

Love the picture of the bride twirling! Everything about this wedding exudes awesomeness!

How cool is this couple!? These are freaking amazing!

Awesome from start to finish!

Super unique and fun wedding! Love couples that have weddings that are them. Perfect!

The ceremony pics are so amazing!

Everything about this wedding. Everything.

Is this for real??? The words have left me. They’re back, Oh My Dark Lord epic!

Love!!, an original and funny wedding.