this story is my favorite! far off places, daring sword fights, magic spells, a prince in disguise.

here’s where she meets prince charming, but she won’t discover that it’s him till chapter three.

carol and brian first met some time in middle school. she a beautiful princess. he a strapping young squire that didn’t think he had a chance with a vision such as carol. they quickly became friends and although each had a hidden crush on the other, neither acted on it. they remained very close through high school, but then a darkness fell over the land and they lost touch after graduation. insert scene of brian in a shiny suit of armor riding his trusty steed through all the lands… fantasyland, adventureland, frontierland, tomorrowland, and even new orleans square, searching for carol.

lucky for brian, fairy godmothers aren’t just for princesses. he had the most powerful one of all… fairy godmother my-space. she reunited our hero with his beautiful princess at a friends poker night, “the best poker night ever” as brian recalls. from that moment on they grew closer with every passing day until at last the day came when brian proposed to his sleeping beauty. *wink wink nudge nudge*

and they will live happily ever after.

before we get to the photos, i have to point out some things that we love about carol and brian. they smile… a lot. they love being in each other’s arms. they love disneyland, movies, mexican food, cotton candy, and wedding shoes that aren’t white. they love photos. in fact, they love photos so much that they booked us to shoot their wedding before they even knew where they were getting married. it’s pretty hard to top that for us, but carol and brian do. the thing we love most about them is that they love to have fun and enjoy life, together.

carol and brian, we can not wait to shoot your fabulous las vegas wedding at caesar’s palace (with hidden mickeys) later this year! we’re so freakin excited! thank you janell for being our matchmaker. it is a very real possibility that ALL of your friends are more fun than whip cream pants. 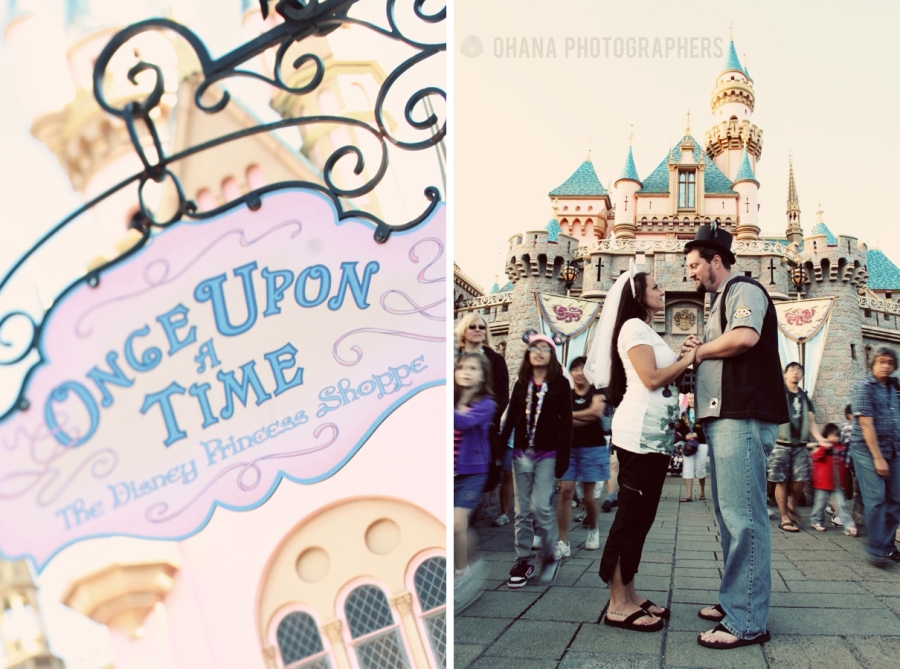 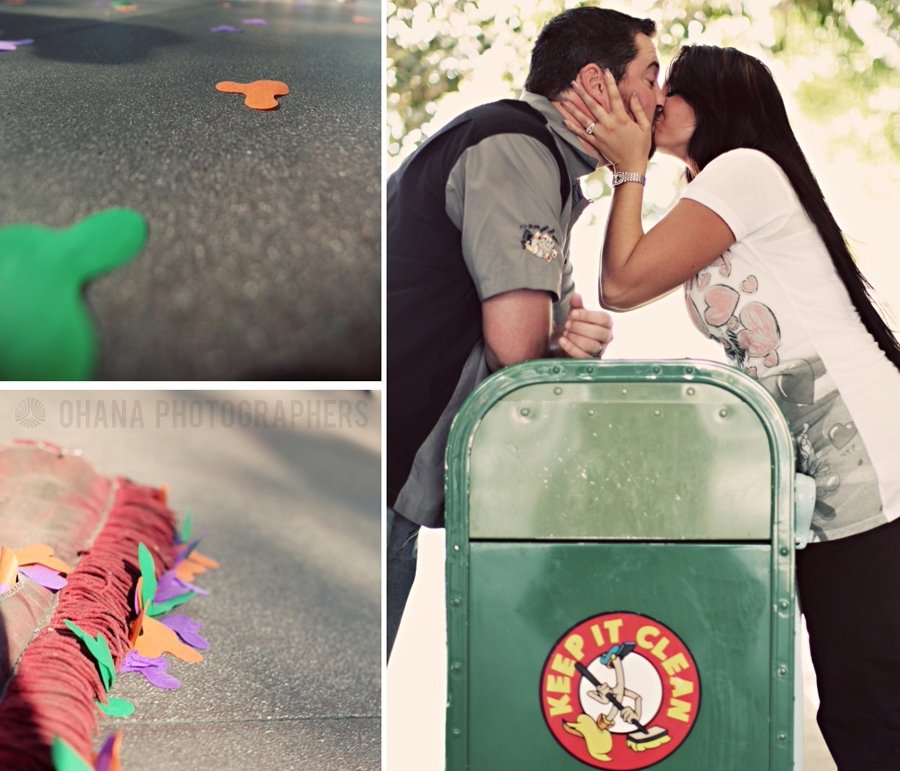 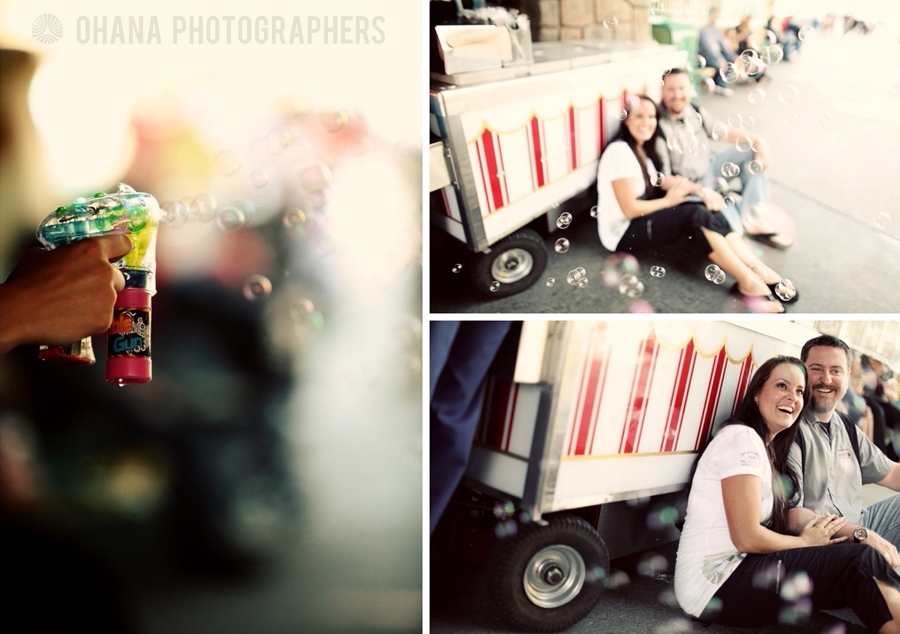 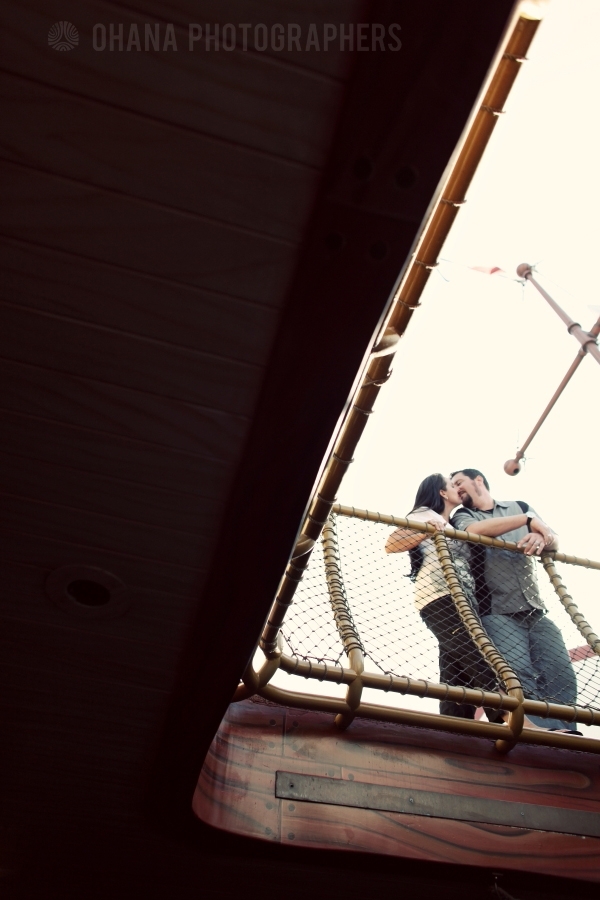 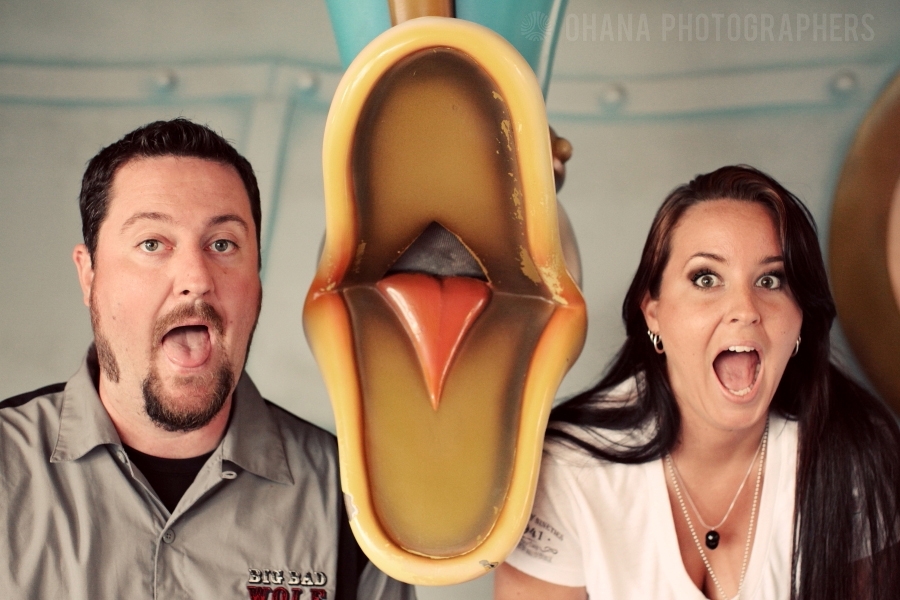 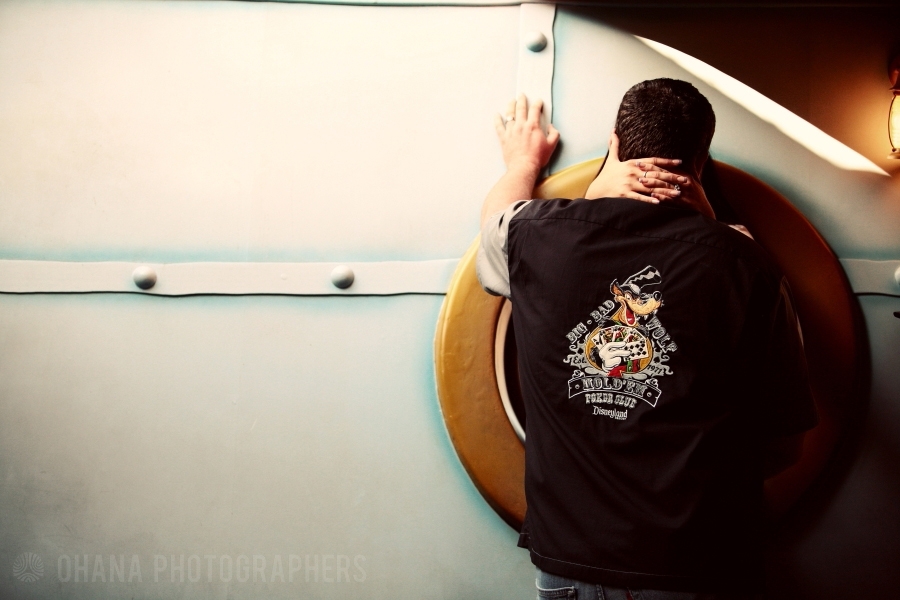 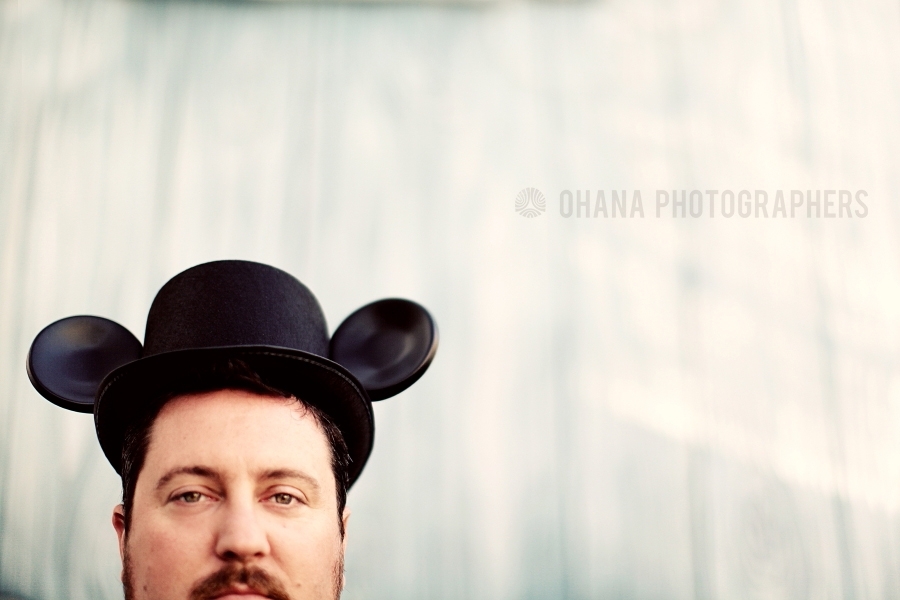 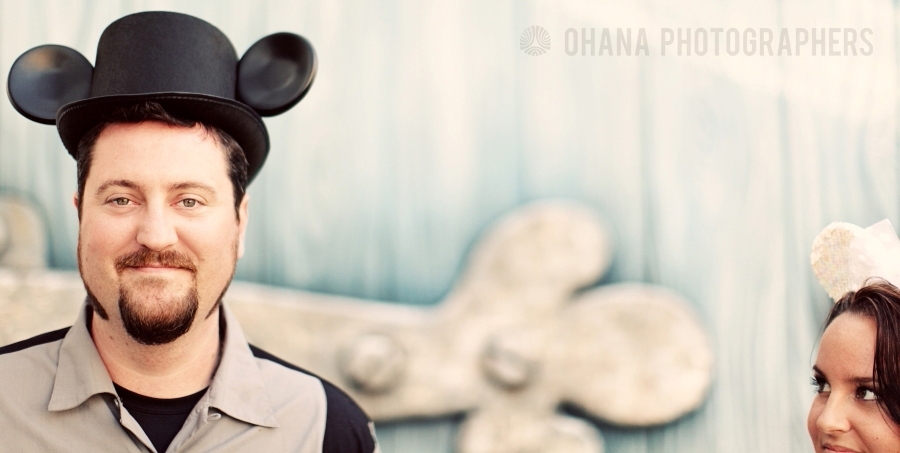 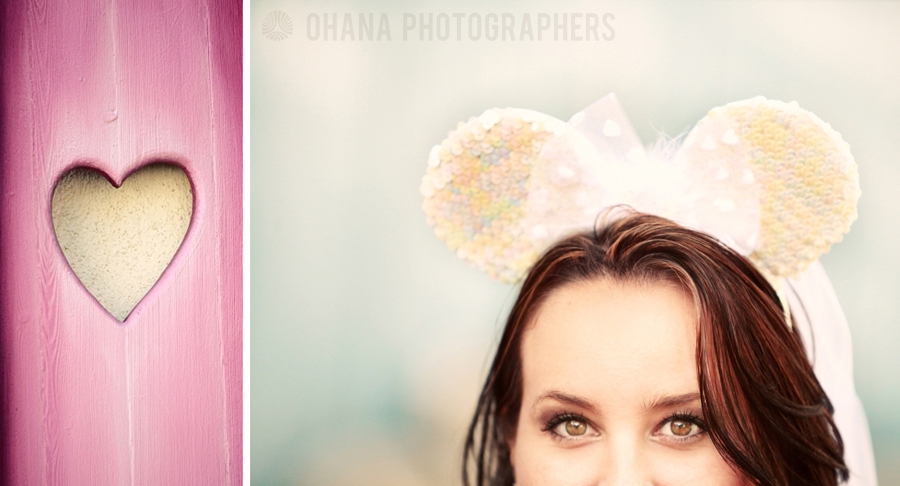 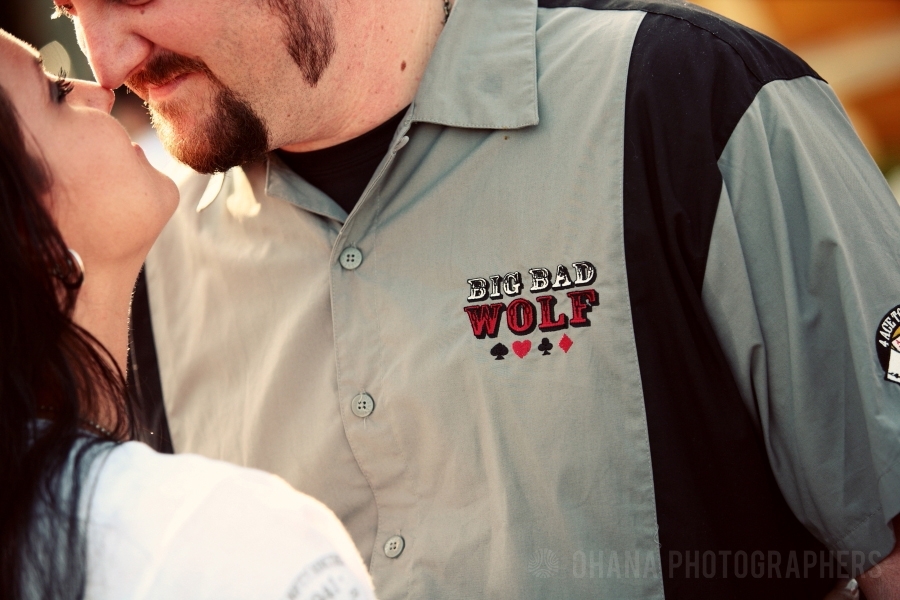 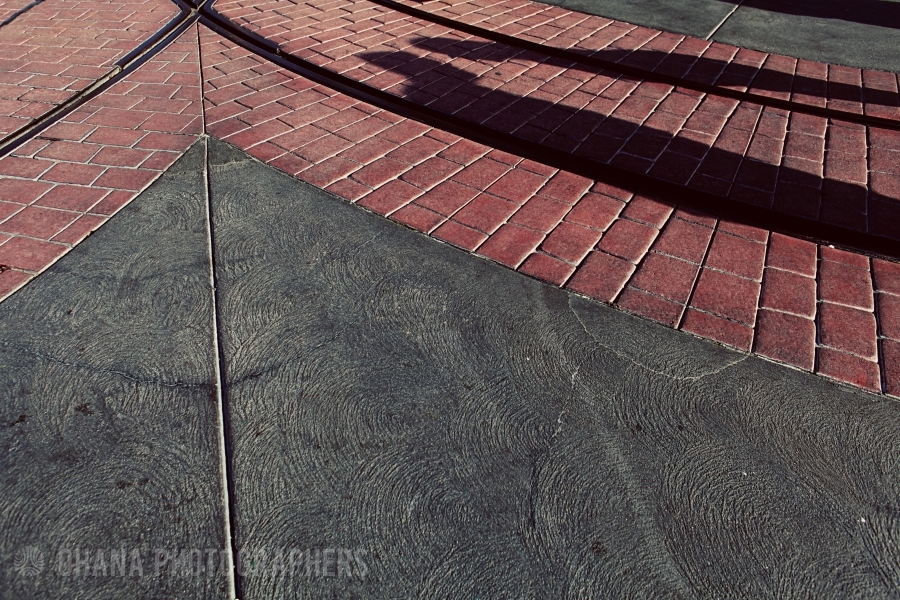 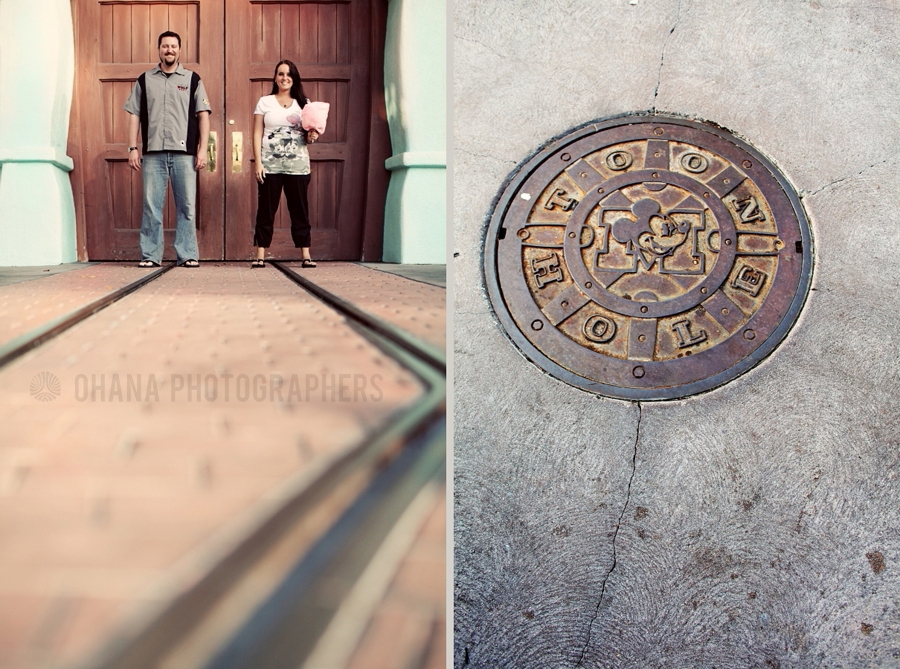 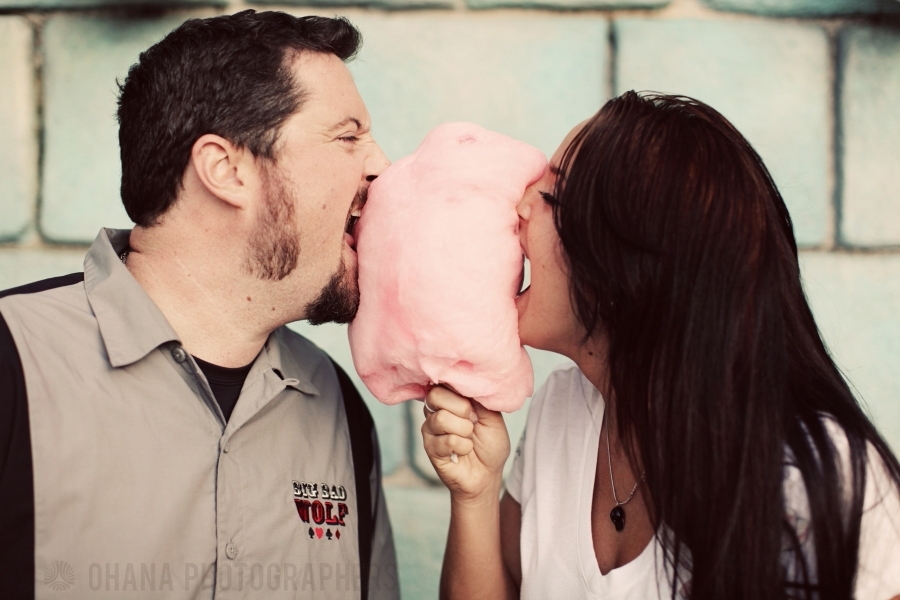 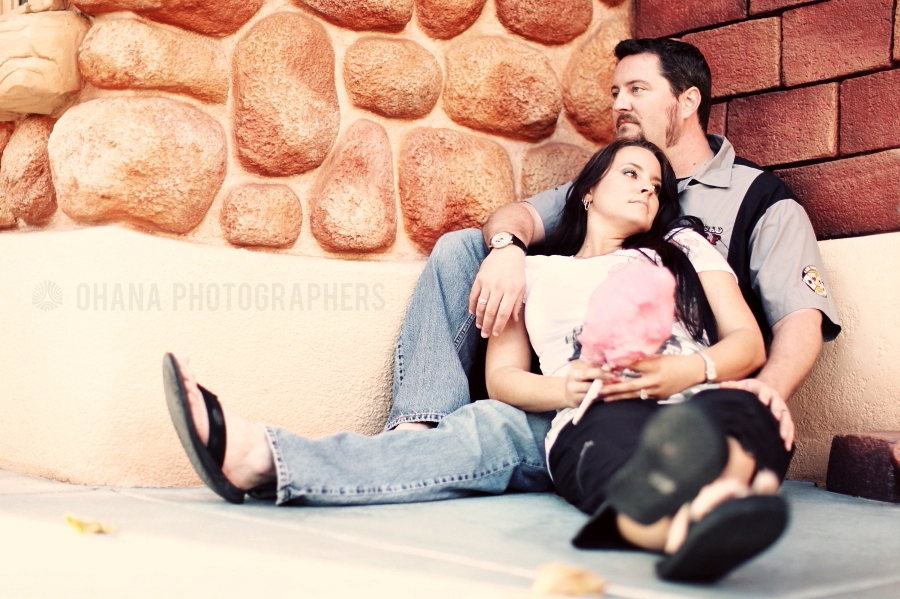 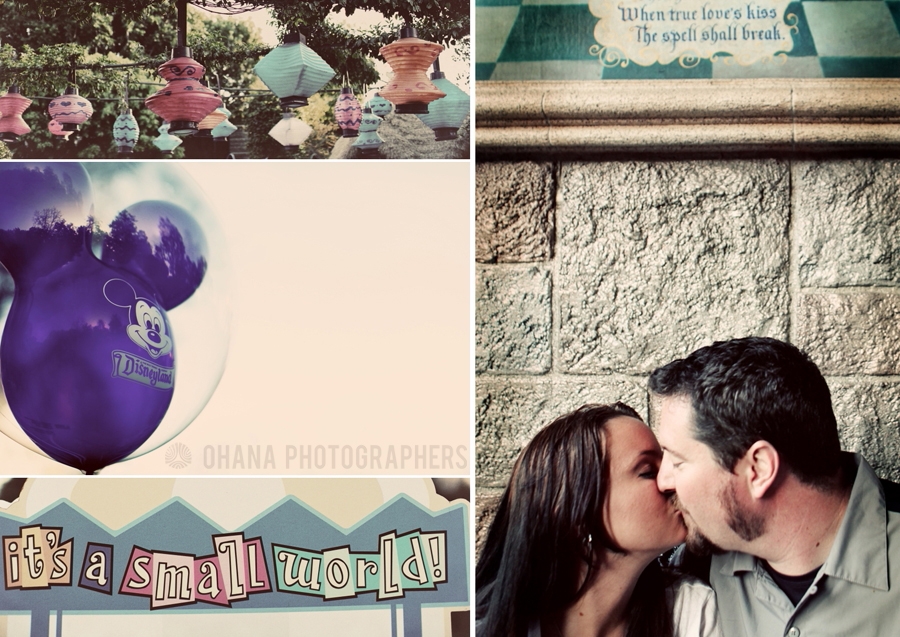 as you probably already know, we are full disney geeks. we never miss an opportunity to go to disneyland, especially for a sweet disneyland engagement. as we were up late one night working on this post kim and i started talking about disney characters and got on to the subject of which character are we most like. here’s what we came up with:

kim is like a mix between meg from hercules and kuzco from emperor’s new groove.

april is like jane from tarzan, minus the english accent (trust me, do not ask april to speak with an accent).

although carol already told us she is like belle from beauty and the beast, and brian is like stitch from lilo and stitch, april thought she would go ahead and draw carol and brian as their own characters on this vintage disneyland map from 1962.

so our question to you is… which disney (or pixar) character is most like you, or your personality? 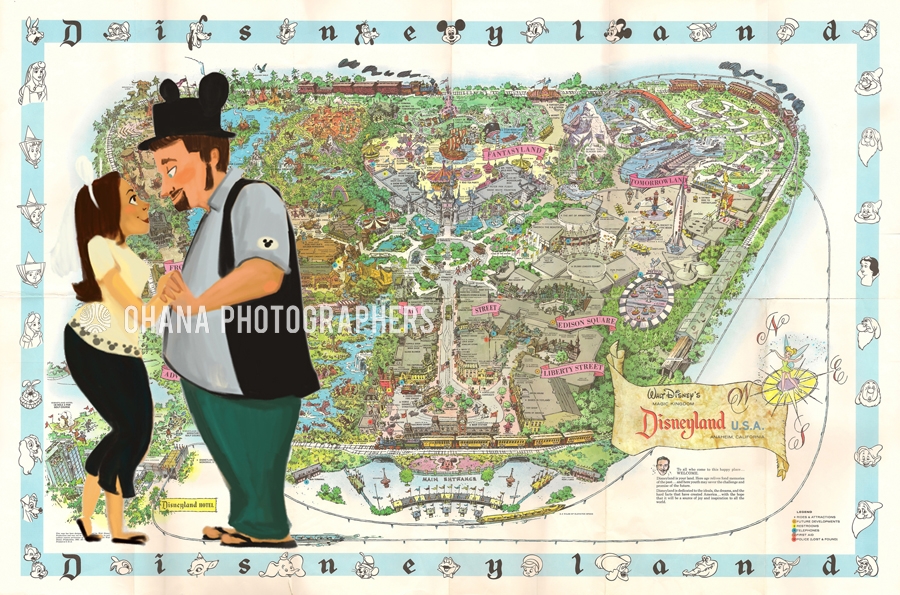 thank you for visiting our wedding photography blog
check out our portfolio.
contact us by phone at 858.663.3283
or email: david@ohanaphotographers.com

The happiest place on earth! I totally see it in these awesome pictures. The couple looks so in love and happy. Her eyes are amazing! Love them all!

I LOVE EVERYTHING DISNEY! Blown away by these pictures! The pics really show how fun and silly their personalities are, the cotton candy shots I just love, especially the one with her hugging it. SO CUTE! I can’t choose a favorite, but I do love all the one’s with the mouse wedding hats!

I’m a total Disney geek! People say I’m like Ariel, but I think I’m more like Jasmine from Aladdin [= Hidden Mickey’s at their wedding, I want to go he he. I love the ones with the bubbles they look SO happy in those. That sketch is way cool too, does she sell those?

Such a fun looking couple! I just love how I can vote for my faves instead of saying…”it’s the one…” Love April’s drawing. Oh and I think I’m kinda like Linguini from Ratatouille. :)

oh my gosh, how fun is your job!!! you guys always make me smile–and now i really wanna go to disneyland!!

The pictures are amazing, they captured your love for each other. Thanks for sharing them!

These are so much fun! I am absoutley digging your new blog…love it!!!

Amazing! I love these. You’ve got some great angles and lighting going here. I really love the shot of carol and brian and the donald duck shot is so funny! And creative! That carousel shot is SO AMAZING! They looks so happy and the blur on the horses! Looks great! And what a gorgeous, happy couple. :) I am probably most like rhino too! Just because I am a pretty huge doofus. :) LOVE THESE PHOTOS What a lucky couple to have such awesome engagement photos

ohana! i totally cannot pick a favorite! LOVE IT!!!

YES YES YES!!! I am in love with this shoot, being that I am also a disney lover and used to work at Disneyland. :) So fun and such a great couple!

These are soooooo fun! Love the details. I know right away how comfortable they were with you and the fun you guys had. Awesome as always.

I am getting so inspired over this shoot, this has to be the most relaxed shoot ever, yet so cute.

I love this! looks like it was soooo much fun!!

Love them!&Congrats for the new Blog:)

Oh. My. Gosh. Ohana + Disneyland = THE AWESOMEST
AND-April is THE most awesome-holy freaking crap!

So much fun! These totally capture the essence of the happiest place on earth! And I love the Beauty & the Beast intro, I shamelessly sang along to the entire YouTube clip!

Oh so awesome! Such fun amazing shots! If we go to Disneyland we’ll be calling you again =)

I hope you all went on Small World, sang together, and bonded with the wee multinational characters.

because, really? best e-session ever!

Epic! This is my most favorite happy place! Love!

BEST DISNEY PICTURES EVER! I LOVE DISNEYLAND! I AM SO HAVING YOU GUYS TAKE PICS OF US ON OUR 5 YEAR ANNIVERSARY. I CHOSE QUITE A FEW FAVS, BUT I HAVE TO SAY THE COTTON CANDY AND THE BUBBLES ARE MY FAVS.
CHARACTER I RESEMBLE I’D HAVE TO SAY COLETTE FROM RATATOUILLE :) AT LEAST THAT’S WHAT MY MAN SAYS =]

I want a sketch of us and photos at disneyland! I found you guys searching google and just fell in love with your pictures and this one and the other disney couple too! This couple is so cute I can barely stand it!
I’m ariel for sure, I wish I was more like Mulan but hey I’m a dreamer.
I will most def bookmark your site in the event I ever find a man :) he he. The search continues!

This couple is so adorable! You really got some great pictures for them to remember and cherish forever. I’m in love with the dumbo and carousel ones, they look so freakin’ happy!!! ha ha! Love that clip and I love your writing.

Disney and Pixar character, Dori for sure!

Beyond The Lens
REPLY

LOVE LOVE LOVE!!!!!!!
I always love to come here and get some eye candy! Thanks for the fill!

cute stuff! This is my 1st comment on your new blog because I couldn’t figure it out the other times I stopped by. Guess I had a lot on my mind those days. Today it was easier to navigate. Thanks for continuing to inspire others with your unique work! :-)

p.s. I have noooo idea what Disney character I would be, like…absolutely no clue.

you guys made disneyland fun and sexy at the same time.

Love all the attention to detail. Looks like a crazy fun shoot!

FUN FUN FUN! Every image really flows together to tell a complete story. I love them!

HOW COOL! I love the location! Were all the kids in Toon Town super curious as to what you guys were doing with your camera? I love the image with the cotton candy!

Wow, I’ve seen many a Disneyland sessions, and you really came away with an awesomely new take. This is why you guys continue to be on my short list for inspiration!

Love it! This just screams fairy land..fairy tales! Beautifully captured. They definitely had a blast

Tooooo many favorites. I’ve never been to Disney world or land or anything. If I were a Disney character I would be Belle, since she’s a brunette bookworm.. :)

holy crap most favorite disneyland engagement session EVAH! i love each and ever picture! you guys capture the cutest and funnest couples. i seriously can’t choose a favorite, but the cotton candy shots make me giggle!

Disneyland rules! These engagement pics are so much fun and so cute!

Wow! These are so much fun!!! Love the cotton candy one! These two are so cute!

These are just to creative and cute for words!

Hi! Where did they make that cool map with their pictures?